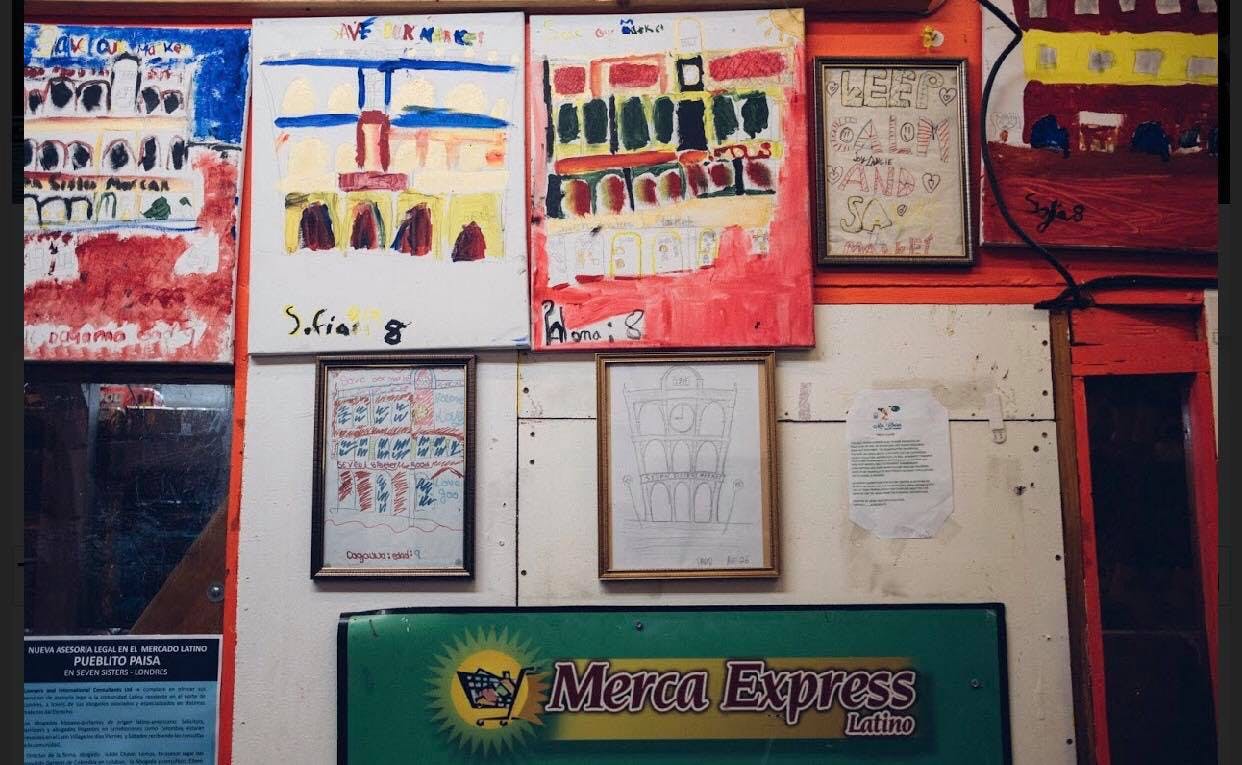 As Above, So Below: The gouging of another community’s heart

Haringey is London’s most diverse borough, it’s heritage steeped in cultures from all four corners. We are something that modern Britain should be proud of, a beacon of hope against a regressive tide of increasing xenophobia, walled gardens and institutionalised prejudice. However if we take Threads’ home of Tottenham we are witnessing the ideological social cleansing of a community in the case of what’s happening at Wards Corner.

There is a misconception that somehow ‘new’ equates to ‘better’, as if there were a problem with the ‘old’. Tottenham is the latest in line for up and coming syndrome. You know where suddenly everyone is described as edgy or a type, it’s nonsense. This is the diverse place that many have called home for generations yet we are facing an identity crisis. Since 2001 South American businesses have been trading at Seven Sisters and it has provided a much needed community for those displaced by conflict and other strife in South American countries.

The Latin Village is a beating heart within the wider community, it is the axis point for many families, the theatre to many a life lived. Those lives are being lived together, for now. The story is regrettably not something unique to the Latinx community and is echoed throughout the treatment of many BAME communities in the UK. We are losing our character because to me, being British is about being part of a rich and diverse cultural heritage. At least that is what younger, more naïve me believed. I still feel that way now however I recognise it is more to do with a legacy of colonialism rather than an embracing of different cultures as a wider heritage.

I should point out at this point that I too am a member of the BAME (Black, Asian, Minority Ethnic, said B. A. M. E. not Baym!) community. I am ethnically half Scottish & half Iranian, Scottish by birth, I grew up in middle England and 100% awesome. So what does that make me? A human? Yes. I also self-identify as Scottish, because well, who wouldn’t if they could!

My reason for discussing this is that I understand what it is like to grow up in a country you are meant to call home but are treated like a curiosity and subject to casual racially charged ridicule. It also means I have something in common with Javie Huxley who agreed to meet with me to chat about what the development in Tottenham means for not only the Latinx community, but the wider community as a whole.

Javie moved to England when she was three from Chile to grow up in Felixstowe and went to school in Ipswich. Our parallels in coming of age in a whiter than white community, no cultural representation and peers feeling they were in a position to comment on our existences due to a different skin pigmentation was rife. Finding the community at Pueblito Paisa was game changing, the sense of belonging, acceptance and something that had eluded Javie and others finding their way in our society.

Javie identifies as a British Chilean and after moving to Tottenham two years ago, it is the first time she has found a Latinx community. After years of feeling not represented in the media or having no one to relate or look to, Javie feels that now she is part of something and there is a way for her to connect with her heritage. It has had a profound effect on her life to the point now where it seems incomprehensible that the Latin Village may no longer be there. Community is something that empowers people, if we grow up outside of a community, everything is impacted. We are isolated. How do we reach out for help with daily life? Can we appreciate how communities are structured if we remove ourselves from what we take for granted growing up in a country surrounded by people who look like us?

Something I can relate to Javie on are the mental health implications of growing up as an outsider. I do not know any other Scottish/Persian people (my family left pre revolution and use the term Persian to distance themselves further from modern Iran) I do not have a connection to that country or way of life. Scotland is my home and my heart, mind, ideas, character and politics belong to it. I do enjoy Persian food but that is where my other ‘side’  starts and ends for me. That sense of a family, friends and neighbours of a shared heritage gathering around a table for Sunday dinner was alien to me, I remember going to a friend’s house for Sunday lunch about the age of eight and having my mind blown at the spread. Yet they were bound by a common sense of belonging. I even feel like an outsider in my own family and its factious nature.

The simple act of breaking bread with loved, like minded ones and those who share our ideas is sacred to many. Consider the place of the kitchen in any family home, that love being baked into bread, affection simmering into a saucepan. All of these things are evident when visiting the Latin Market, you are met with the smell of the empanadas, the sound of laughter and the sight of people dancing. It is a place for everyone, all are welcome yet all choose not to see that. These are things we take for granted. These are the things we should cherish and these are the things that the Latinx community stand to lose in the face of this development.

Is the British way to forever condemn those who are different to live a life on the fringe as outsiders? Are we to gather around our own to tell stories of times gone by and visions of a harmonious future that may or may not come to pass? Is it the ‘British’ way to shame those who came here to seek a new life because it was not possible for them to remain where they were before?

At what point do we draw the line?

The Latinx community is as much part of Tottenham as anyone else yet it seems perfectly acceptable for the council to displace them. Haringey council has the final say in the development and while David Lammy (our MP) is vocal regarding the treatment of Windrush citizens (and rightly so) he remains curiously quiet regarding the plight of the Latinx community in Tottenham. Why? He is equally responsible to both, both are facing the realities of systemic oppression and together we must stand as a united voice against institutionally driven inequality and racism.

We can also view the Latin Village as a representation of what is happening in our society at large. It sits as intersectional point of the following waves of systemic oppression: Race, Gender (70% of traders are women), institutionalised xenophobia with Brexit opening the door to racist attitudes that had been simmering away under the surface of the UK for years. I grew up in white middle England in the late eighties and nineties, it was alive and well, trust me. If anything it never went away. What has become home to a community is seen as a blight on the progress of ‘blighty’ and that is deeply troubling. The Latin Village has made use of existing space abandoned by others due to a seemingly unsightliness. Now Tottenham is becoming cool it is in the developer’s sights due to it being reduced to nothing other than ‘prime real estate’. How many of the traders would be able to afford spots in the new market building? The council has ‘graciously’ offered a 30% discount to existing market license holders upon the opening of the new site. Let’s get real, that isn’t even lip service. That is an insult to every child that has played in those corridors, every laugh shared over a cold drink in the bar, every story told over dinner served and every sigh of relief breathed in a home away from home. The issue is if we are not engaging with the minority ethnic communities in either learning about them or supporting them we are guilty of gentrifying them. We are driving up the rental prices, laying the foundations of luxury, unaffordable flats while families (some of whom vulnerable) are thrown out of their homes so we can end up with another faceless borough built by the lowest bidder.

Are the lives of BAME communities worth less than others? The evidence points to such a conclusion. The issue is people no longer care about things that do not directly affect them because they can still go about their day visiting chain stores. They probably wouldn’t bat an eyelid if the Latin Market popped up again but instead of family run small business it was a selection of Las Iguanas, Wahacca’s, Chipotle and other ‘diet coke’ versions of the real deal.

If you want to help you can donate to their Crowd Justice campaign to raise the necessary legal fees to fight the redevelopment case. The Latinx community’s sister hub in Elephant and Castle is already scheduled for demolition, with Wards Corner in danger, what happens next? Haven’t people taken notice from ‘I, Daniel Blake’? Where is the equality in our society? Are we showing solidarity with the Latinx community in London? Are we even standing next to our fellow humans as they stand to lose something utterly dear and immeasurably important?

Javie Huxley is a British-Chilean illustrator based in London, who currently illustrates for publications such as gal-dem and Shado Magazine. She recently completed an Masters in Children’s Literature & Children’s Illustration at Goldsmiths. Her work explores diversity, identity and social justice.

Al Ballentyne is head of editorial at Threads Radio and a freelancer working in entertainment, broadcasting and education. He performs regularly a ‘Barry Bungalow’, a surrealist cabaret entertainer & storyteller. He co-runs ‘Canned Aid’ – a social initiative aimed at taking direct action against food poverty. He works as ‘The Guerrilla Mystic’ which is a project aimed at demystifying spiritualist ideas and practice so more people can access and benefit from connecting with the energetic flow of the universe. He hosts ‘Barry Bungalow’s Extreme Fetish Club’ & ‘The Guerrilla Mystic’ shows on Threads. Al works as a guitar-for-hire, general disco menace and moonlights as a lecturer/educational consultant. You can connect with him on