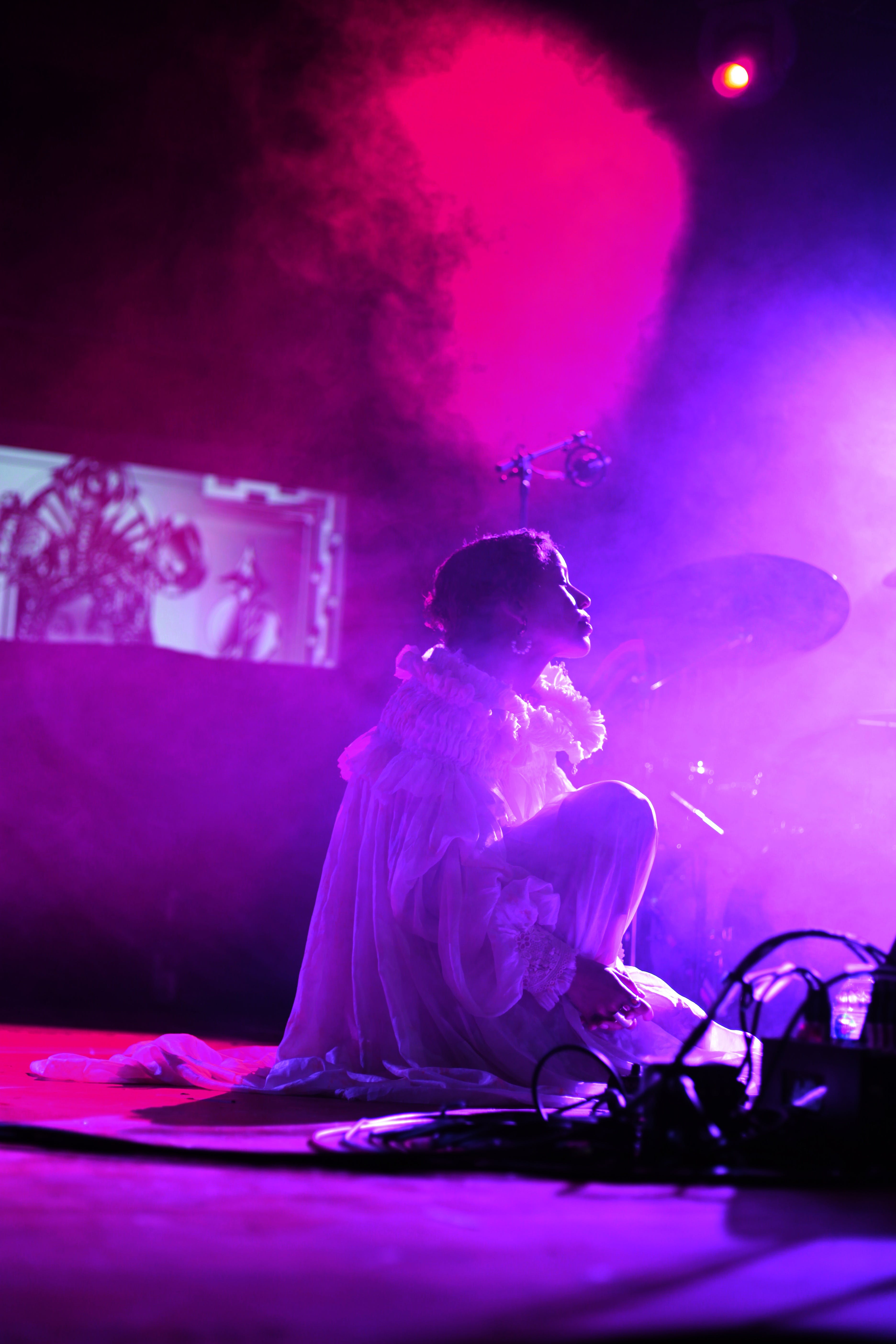 The artist stunned the world with the release of her EP ‘Cleo’ in 2017 and her vocals have been compared to Erykah Badu and Amy Winehouse since, but Charlotte demonstrated how unfair these comparisons are by giving a unique and extremely personal performance.

The show started with the London-based composer and producer Ahnansé who was a perfect match and set up the right atmosphere before Dos Santos. EartH isn’t a particularly small venue and Ahnansé still managed to get them all in the same listening voyage and made us all lose notion of time. The lighting was set up perfectly and mesmerised the audience in a way I haven’t experienced a lot in the past. Altogether the lighting, the venue, with an abandoned theatre feel to it, matched the artists’ elegance and set itself to be a necessary addition to the bill.

Charlotte Dos Santos appeared on stage at 9.30 on the dot wearing a beautiful white dress that played an important role throughout the performance, letting her swing along with her band’s masterfull sound and playing a beautiful game with the lighting of the stage.

Dos Santos won me over at her first note. You could already tell that her and the band were of the calibre of artists that sound exactly like the EP and deliver soulful and perfect performances. She carried on a lovely dreamy feeling throughout the show that made it feel like talking in between the tracks was a disservice to the beauty of the performance.

Charlotte visibly gained confidence and comfort as she went on with the performance and danced along during all of her time on stage.

The band started playing one of Dos Santos’ most popular singles “Red Clay”. A huge wave of applauses started when the artist started singing the lyrics, that seemed to be well known to everyone in the audience. During an interview with The Fader in March 2017, the artist explained that this track “ Is about someone who took advantage of my creativity and love and needed me to help them take form, shape them but in the end, to me, the person was nothing but mud which eventually will crumble or dissolve.”

She performed this single so beautifully that all of us present at that venue would have given it all up to follow her wherever she might take us.

Other tracks like “Take It Slow” allowed us all to continue the magical journey where the vocals melted with the instruments and made us all wish for another hour of performance.

At 10.30, Charlotte and the band waved goodbye and as we all had to slowly snap out of the trance we were in, she climbed back to the stage to deliver a solo piano performance to give the perfect encore to one of the best live performances I have been lucky to experience.

Dos Santos is currently working in her next album, expected really soon. Check out her 2017 album ‘Cleo’ here.

Alejandra Cabrera Abasolo is a freelance journalist and member of the Editorial Team at  Threads Radio.

She has wrote for publications such as Mixmag and is currently studying Journalism at City, University of London.

Alejandra has a passion for music and photography, which are the main topics of her work.