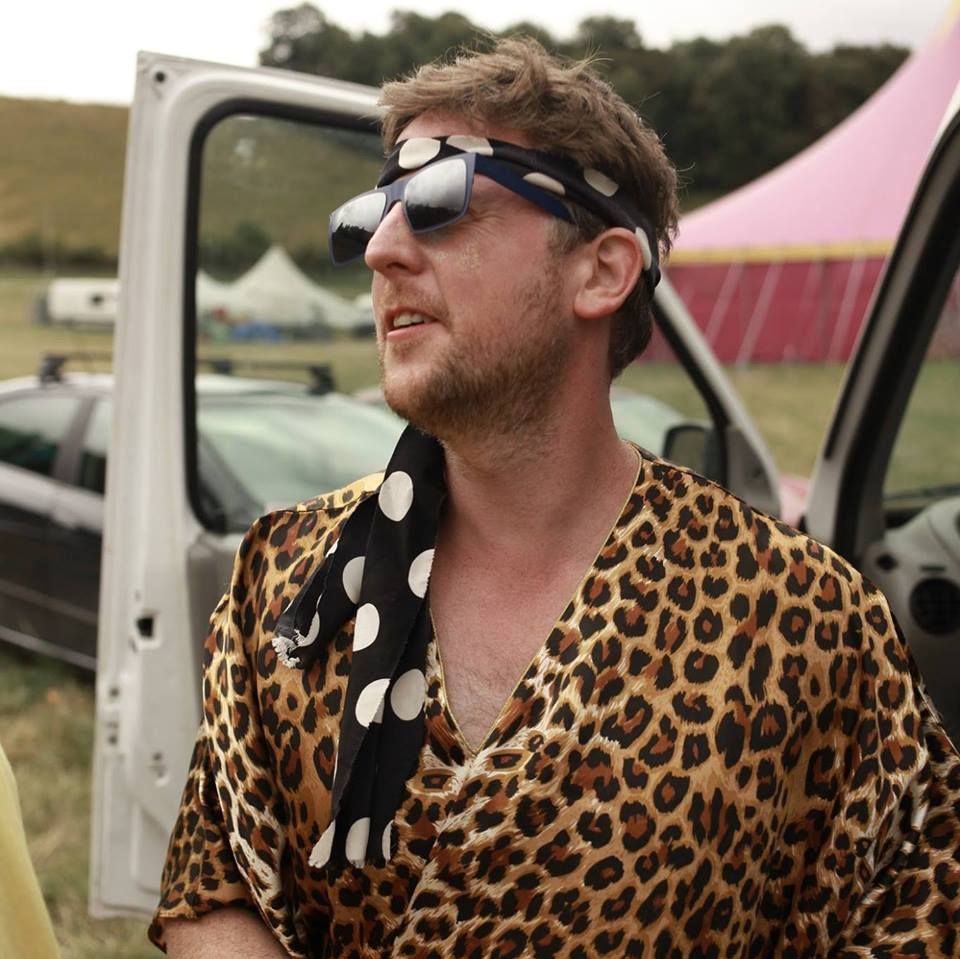 I played in two capacities at this fabulous festival near Winchester (they build an entire town it’s like several conjoined 007 movie sets) – 60,000 revellers of all ages and it’s so well run you never have to queue for a drink. So relaxed. Hired actors role-play in the crowd and at silly and spurious strange little businesses. A Las Vegas hotel where you are encouraged to role play with the staff. So many venues and tiny discos to get lost in, all lovingly created and exquisitely produced. Attending a festival like this inspires me to raise my own standards. In the woods, 4 huge reggae sound systems are joined together and are rolling out dub, with the bass the most incredible I’ve ever felt.

The demographic at this gathering is staggeringly wide- and better for it. From 16-year-old locals getting high for the first time, to international, and seasonal, festival professionals. On the Saturday morning around 8am I’m sat around a campfire in the woods with around 8 other stop-outs (where they’ve built a wooden Bali-style beach resort, complete with a shipped in beach) and a self-styled chav (I hate this word, like most labels it’s unhelpful, but the young dude in question self-deprecatingly described himself as such) remarked ‘what a diverse and multi-racial bunch we are.’ Then followed a torturous chat between him, his girlfriend and my mate, Joe (musical partner in the Psyfunkel project, actually it’s mainly him who is the multi-instrumental genius in the studio – I make grooves and tea). Joe was trying to explain who Alan Turing was and why he was so crucial to winning the second world war.

“Wasn’t it because we had better guns and tanks and shit?” say the Chav.

“How do you think we knew where to send the guns and tanks and shit?” I interject. “We cracked the Nazi’s code! We knew everything they were planning! In fact, even though we knew what they were gonna do from the minute we cracked the code, we couldn’t act on it straight away because they would have worked out we had cracked it and changed the key – so we had to knowingly send soldiers to their death for the greater good!”

I turn to the hippy couple beside me and, under my breath, remark: “proving the existence of the enigma machine and code-cracking genius, Alan Turing, is not high on my list this morning. It’s a whole to-do.’

Alan Turing is a hero of mine. He won the Second World War for us, invented the computer and – as a side-hobby – proved that mathematics made up our universe: sacred geometry. How did we thank him? Chemically castrated him for being gay. He killed himself at the age of 41, with an arsenic laced apple (or got knocked off for knowing too much? Someone, somewhere, knows the truth.)

I played a Psyfunkel DJ set at the Loose Lips Block Party at ten to one on the Saturday afternoon, riddled with tunes from our soon-to-be-released album ‘Electronic Mistakes Vol One’, and then on the Sunday eve on the Floating Lotus stage with the Cable Street Collective in my capacity as Bez with filters. The two gigs couldn’t have been more different. In the DJ set the guy before me had been playing fast and happy house records to a receptive crowd. I don’t really have these records and struggled to match his vibe. Within 4 records after a safe and well-received start with the Jungle Brothers’ ‘I’ll House You’ I’d all but cleared the floor. I killed it, and not in a good way. You win some you lose some. I just didn’t settle on a vibe until too late. I gradually built the crowd back, and set it up nicely for the next DJ but, no, it wasn’t a great set by any stretch.

As I leave the stage I’m immediately ushered in front of a camera to record an interview for their YouTube channel. ‘How was it?’ Dougie the artist liaison asks, conducting the interview. ‘Not great, ‘ I answer honestly- I’m really not into small talk. ‘You win some you lose some. Maybe I shouldn’t have stayed up all night. I mean, I had fun, I always do. Hearing your favourite records so loudly on a fat sound system never gets old. But I didn’t lock the dance floor in’ – I sound like Jerry Seinfeld discussing a dodgy set at the Improv in LA. ‘I can get by on my fame for a few minutes. They are warm and welcoming for a bit. Then they are like, ‘right, where are the jokes?’