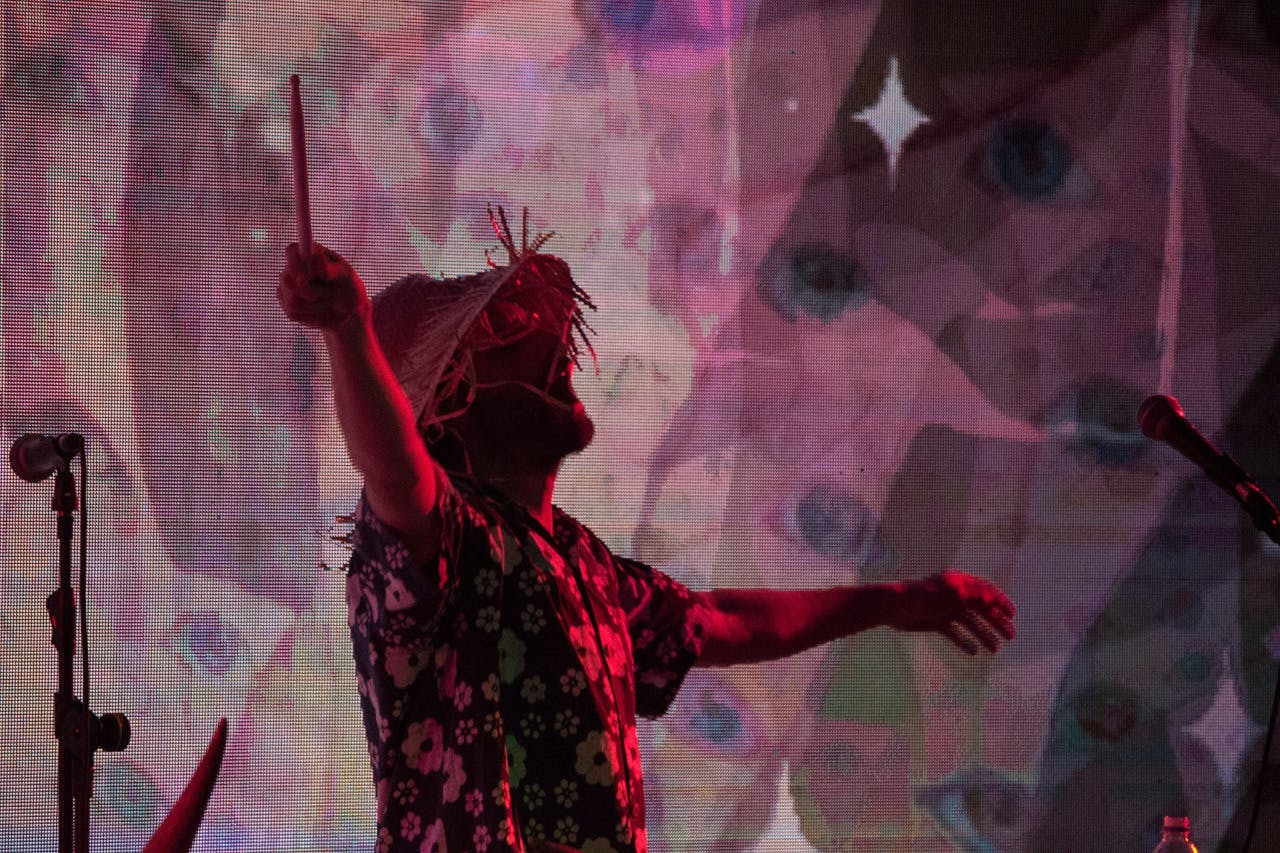 (Chancha via Circuito. Courtesy of artist)

After the fire that took 200 lives during a gig in República Cromañón, a club in Buenos Aires, the city’s nightlife experienced a vast decline. The government shut down several venues, leaving party-goers devastated and launching them into a quest for safe spaces to express their love for music.

From the ashes of República Cromañón, a new scene arose when the underground parties called ‘Zizek’ commenced in the Argentinian capital hoping to revive the nightlife. These parties were known for offering all different genres of music in the same night, from electronic to traditional Latin American cumbia, which provided a new platform for experimentation and freedom. These parties were the crucible for the new genre “digital cumbia”, which was characterised by mixing the Colombian genre in a modern setting through technology.

The organisers of the ‘Zizek’ parties realised this new wave that was taking form in their events and decided to give them a platform, creating the label ‘ZZK’. Amid this developing electronic movement, artists like Chancha via Circuito and Nicolá Cruz started to mark a trend that changed the way that electronic music is produced in Latin America.

‘ZZK’ and what was first described as ‘digital cumbia’ broke barriers and started a movement that can only be described as eclectic and fails to adhere to any subcategorization, probably the reason why western media has talked so little about it. Artists by the likes of Nicolá Cruz, Lagartijeando, Chancha via Circuito and El Búho are offering a new musical language through experimentation that has an understanding of the local indigenous and afro-cosmologies and work with soothing organic sounds that sonically recreate the beautiful South American landscapes without leaving the dancefloor.

Shaman chants and charango (a small Andean guitar that was traditionally made from an armadillo shell) are the defining sounds and the foundation of Matias Zundel’s music. In a quest for his identity and hoping to grow musically, Matias moved from his smaller village in Argentina to the capital, where he studied Sound Engineering. Matias then started mixing electronic with cumbia, rock and hip hop and, after moving to Mexico, his project ‘Lagartijeando’ was born.

“I wanted to work more with identity, you know? I wanted to give a light on the identity of our culture and how to work with music from here (South America)”, he says when talking about Lagartijeando.

He explains how his project has been in continuous evolution. He started out mixing cumbia and electronic influenced by genres like dance, hall or hip hop. During his early experimental phase, he started to realise that his beginnings were, as he described jokingly, “bastard of all genres”. Matias’ tracks would produce bpm’s too different. “I could be producing from 70 to 150 in all that spread of bpms, you know? It was really fun because I wasn’t thinking of playing it live or in anything at all. But when the moment came to present it live, a dilemma raised. It had too many intensities, too many energies to it, playing a lot of rhythms with different timings felt like too much information and I also felt that it worked best in the dancefloor to keep the same rhythm. You question yourself about your premises and about what are you looking for in a good live show.”

Matias then started producing something more constant, that had the decadence and trance of European electronic music, as he described. He believes that what he is producing now is something he feels more identified with and that people coming from electronic can perfectly understand:” maybe that’s the hook of it, like the new language that’s being generated in a way respects the decadence of trance, of entering a trance and remaining on that flow that maintains that hypnosis but being more eclectic and experimenting with cultures. In my sets, I like to go through different ways, to different situations. I love to surprise the audience and present different landscapes and flavours.”

Matias reiterates the importance of being different and not settling on a formula since he is already seeing a scene and a new set language being developed. “It can be dangerous because what I’ve noticed is that a lot of artists and tracks have started to sound the same and to feel repeated, you see? this is artistically speaking, quite dangerous.”

Pedro Canale (aka Chancha via Circuito) is one of the South American producers that has been able to spread his understanding of electronic music more significantly than his contemporaries and was an undeniable source of inspiration by the generation of artists to follow. Canale, in an email exchange, wrote about his journey with excitement and praised the fact that western media is paying more attention to what is forming musically in South America but attributes the lack of coverage from London to a massive array of genres and subcultures that make it hard to really cover a particular scene different from the mainstream.

There’s a tendency to define and set structures into music genres that has made out of the music being developed in Latin America to be categorised into “digital cumbia”, “electrocumbia”, … Pedro says, “Let them call it whatever they want, sometimes it’s easier to refer to it as electrofolk and be done with it but in reality, we know that all of this surpasses those limits”.

When something tends to work musically, there is always the fear of repetition and lack of innovation but Pedro thinks that there are still a lot of artists who break with what is been established and they continue to make it better like Mateo Kingman or Baiuca.

“There’s still a long way to go,” continues Pedro, “there is still a lot to experiment with and discover. We just have to abandoned the idea that everything we do has to work on the dancefloor.” The only thing that this movement has in common is the need of experimenting and the desire of pushing limits. What it’s being explored in Latin America doesn’t fall into a specific formula and continues to reinvent itself with what the artists producing it are feeling.

Clubbers outside of South America are feeling more attracted to this tribal kind of music that evokes the nature of its land and has often been labelled as “organic electronic” wave. The journey really is captured in the sets of the artists by the likes of Chancha via Circuito, Lagartijeando and El Búho.

Robin Perkins (alias El Búho which translates to “The owl”) grew up in a cold little town of Northern England but found his musical home in Latin America. Robin started to produce a mix of techno and dubstep but admits that this was never the sound that fully defined him.

When Robin moved to Argentina and started attending some of the ‘Zizek’ parties, he felt as if the world was opening up ahead of him after seeing artists like Chancha via Circuito play.
“From there, I started trying new things, to mix Latin sounds and something I really liked and it defined better my identity. I was fascinated.”, he describes.

He then commenced a journey around South America where he discovered a vast range of music. Robin felt that the landscapes and folklore of places like Peru, where he stayed for 3 months, inspired him to start producing his music.
“When you start looking for the roots and traditions of any country you discover a vast richness in them, not only in South America. We want to explore how to get out of the norm with electronic. This is a ‘no barrier’ movement.

This English born owl found his sound and started producing with ZZK records, together with Nicolá and Lagartijeando. He now feels his identity to be as Latin as it is English and keeps producing evoking tracks with artists who explore similar routes.

This movement, although having started to form back in 2006 with Zizek, feels like it’s only just beginning since it continues to explore new sounds offering a journey in each of the sets of the genre. With growing popularity in Europe, El Búho and Lagartijeando continue to tour and release mixes and they will both be sharing their understanding of contemporary electronic with the world.

Matias Zundel feels optimistic about what he and other artists are doing: “This movement has the capacity of nurturing from music from all over the world. It’s really diverse and it will continue to grow, it’s only the beginning”.

Robin seemed to agree, “What happens next? We are in a really interesting wave but we must continue and evolve. As a musician, you need to be pushing yourself to new things and to develop within the same vision but with different stuff. I believe that the future is going to be good to us.”

Alejandra Cabrera Abasolo is a freelance journalist and member of the Editorial Team at Threads Radio. She has written for publications such as Mixmag, and is currently studying Journalism at City, University of London. Alejandra has a passion for music and photography, which are the main topics of her work.