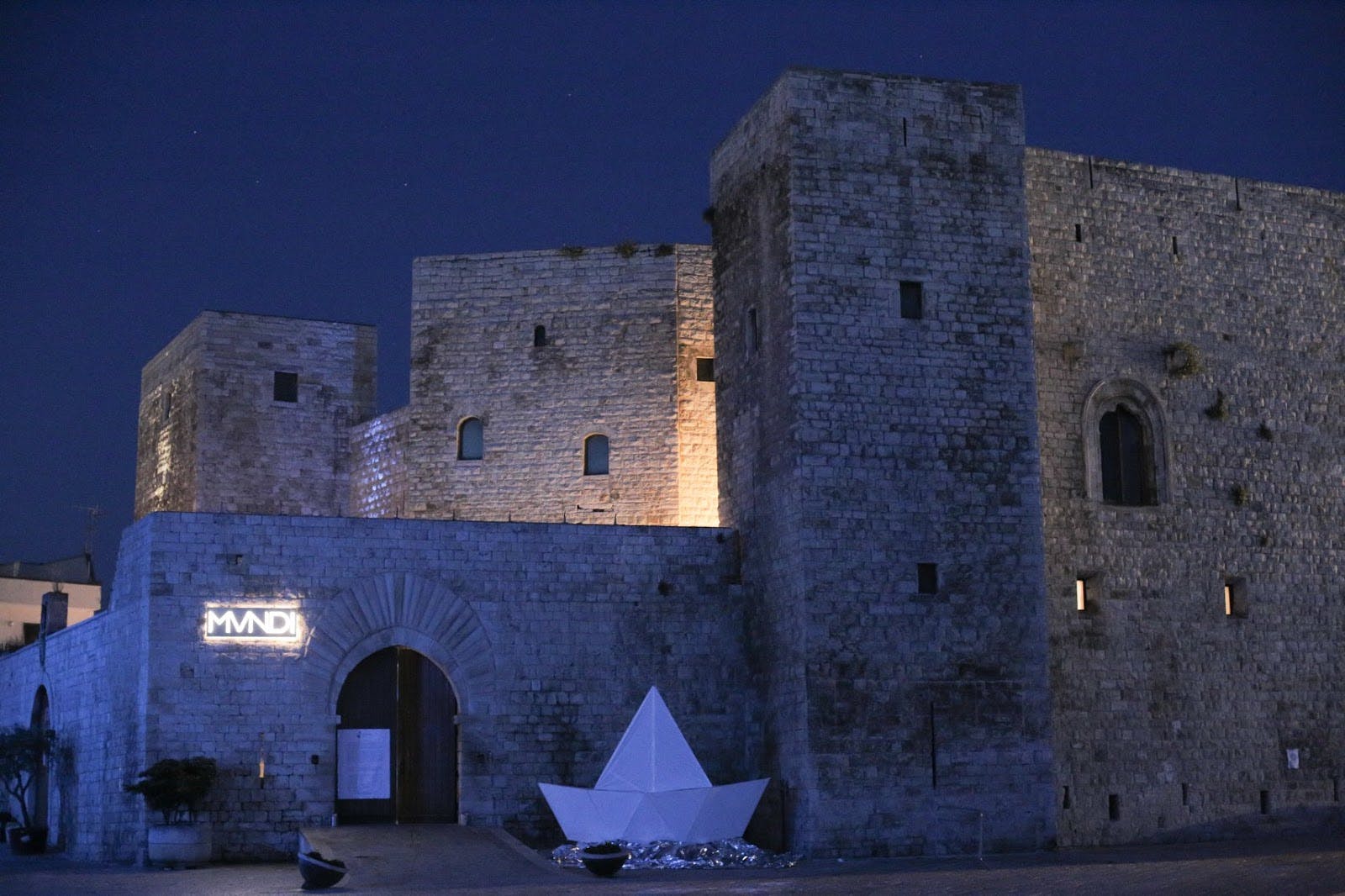 Federico Zonno is the artistic director of MUNDI, a music festival that takes place at the Norman Hohenstaufen Castle, in Southern Italy. Threads’ Alex H Honey caught up with Federico to talk building a utopia, multiculturalism in music, and the ‘Global South’.

Hi Federico, hope you’re well. Would you like to speak a little about the concept behind MUNDI and how it originally arose?

Hey, Alex, thank you for having me here. I am well, locked inside my family house, as are many of us in the South of Italy. The abundance of food and sun makes everything a bit better. The whole concept behind MUNDI came out in a very specific time. It was 2018, and Italy was experiencing a scary rise of xenophobia towards African migrants, fed by far-right politics. We wanted to do something to change this, to show how interconnected we all are. Puglia, the heel of Italy and the region where we do the festival, has always been a meeting point for cultures coming from all the corners of the Mediterranean Sea. In the middle of our town, Sannicandro di Bari, there is a Medieval Castle dating back to the 12th Century. It flourished under the Normans, particularly under Friedrich II, a king famous for his love of the arts and for having, in times of great division, a multicultural court. His curiosity and thirst for innovation earned him the nickname of ‘Stupor Mundi’ (‘Wonder of the World’). And that’s where our name comes from. We believed that in order to imagine a better future we needed to go back to our past and to the multicultural vocation of these lands.

What was it like to start your own festival, and what were some of the toughest challenges to overcome? If there was a single idea that unites your programming, what would it be?

Ah, it was as beautiful and mad as it sounds. We had never done something of that size before, with as many artists involved, as many exhibitions, as many talks. But we pushed through it thanks to the support we received from the people around us, from our community. The festival was a great opportunity to put people together, to express local talent. The easy answer to your question about challenges would be finances, the harder one would be audience. Our musical taste does not always follow what’s trending and out-there. We rather have our audience discover something new and that’s hard to communicate sometimes as the programming explores new sounds coming from Africa, Latin America and the Middle East or from the encounters of local and global styles. Again, the nickname ‘Stupor Mundi’ really describes us, ‘Wonder of the World’. We want to create new connections between places, cultures, and times.

Your Threads mix at the end of last year gave listeners a taste of MUNDI’s sonic diversity. Was there any particular reason for showcasing sounds from the Global South in particular?

The idea of Global South is something particular dear to me. It creates a connection between distant and often underprivileged lands. This connection can become a ground for dialogue and development. I see it as something that applies to the Italian South and as a lens to reimagine its future. I tried to bring this feeling of commonality in my music selection which touched Latin America, Africa, and Southern Europe. I see this as a sort of political act of representation and pride, as a tool to establish a dialogue beyond borders.

I heard that the location of the festival was chosen to challenge narratives about the south of Italy as backwards’ or ‘uncultivated’. Why was it important for you to challenge people’s preconceptions in this way?

The South of Italy is often perceived as backwards, exotic, lazy. A paradigm that has constrained us. Instead, in our slower pace of life, in our openness towards everyone there is something extremely modern, something that can make our society more fair and more human. We wanted to show that. We are blessed to be based in an incredible monument, a castle, with its court, its dungeons, and its rooms dating back to the 12th century; a truly magical place which brings you back to a time to when these lands were at the centre of European and Mediterranean encounters. This place, so old and fierce, is a good starting point to create new futures. I really suggest to check the book Pensiero Meridiano by Franco Cassano to understand this better, or Gramsci and his idea of Hegemony, he always had everything figured out. If we try to understand the South through the paradigm of capitalistic progress and development, by default it will always be the weaker term. Instead, we deserve a voice to write our own stance.

I’ve always thought of festivals as places to connect with others and s(t)imulate utopia, and MUNDI has been described as ‘a horizontal meeting point, utopian and imaginary’ between ‘distant peoples, opposite sciences, different races and creeds’. Do you believe that these meetings of opposites help us to imagine different futures? Is there some kind of aim in mind?

Absolutely, in Italy we need to rebuild an awareness of our multiculturalism. I use the word ‘rebuild’ because our history is so dense of different cultures coming together, of innovation and ideas blossoming out of these encounters. Our position, in the middle of the Mediterranean Sea makes us a place of arrival and departure, this openness needs to be a resource, not a limit, as the fanatics of walls and borders would like to make us believe. So, yes this is our utopia, our plan for the South.

Your festival is non-profit and plastic free, and also partnered to help the international development VILLAGGIO PUGLIA project in Uganda. Is it important to you for the festival to have a tangible, economic impact and what have the results been like?

As you said, running a festival is similar to imagining a utopia, to creating an ideal place for everybody. In MUNDI, we take this responsibility seriously, paying close attention to our environmental impact. Moreover, we do not want to be just preachers, but also doers. We partnered with an NGO, Meridians Onlus, based in Puglia. They have done incredible work in Uganda over the years: opening schools, recreational centres, and clinics. This work is an example of how two very distant places can be linked and how much beauty can come out of this. These connections are borne out of a common feeling of humanity, of doing good for your brothers, of dialogue.

Given that your work must involve a lot of organising people, how has the COVID-19 outbreak affected your daily rhythms? How do you think the events industry can bounce back?

Everything has changed. This year, for our third edition, we were planning to go big. To do more events before, to get the hype up and our community together. We were also planning a showcase in London. Everything had to stop and the future looks misty at best. This crisis has helped us learn how to use digital tools better, and this is something we will bring in the future, but nothing compares to the feeling of interconnection you have when people are dancing together, sweating together. Personally I think that only with a vaccine we will be able to do things the way they were before, and this might mean waiting. But we have things cooking up.

Any artists, organisers, or crews that you’re particularly feeling at the moment?

So, these uncertain times changed my listening habits a bit. I found safety in more deconstructed electronic music then what I usually listen to, in particular Lorenzo Senni, that published his new album on Warp, Scacco Matto; Beatrice Dillon, with her debut on PAN and Kelman Duran. This music sounds like a memory of a party to me, club music reworked by personal feelings and ideas. Also Nidia, Populous and Nihiloxica have delivered very cool releases lately.

On the other hand, I want to give a shout-out to all those people in Puglia that are trying to redefine what (electronic) music is and what message it can convey: from festivals like VIVA, Sparks, Underwood, Chiasmo and Polifonic to parties and record stores – Studio Rotto and EXP Records by the mighty Donato aka DJ Plant Texture – or labels like Cosmic Rhythm and radio stations like Roaming Radio. Come to Puglia, we’ve got great food, good people, blue sea, hot sun, stunning landmarks, and good raves.

The last shout out goes to Threads and the beautiful people behind it. We have a lot of love for each other.

Thank you! I hope to be able to attend MUNDI the next time around.

Alex H Honey is a researcher and DJ based in London.