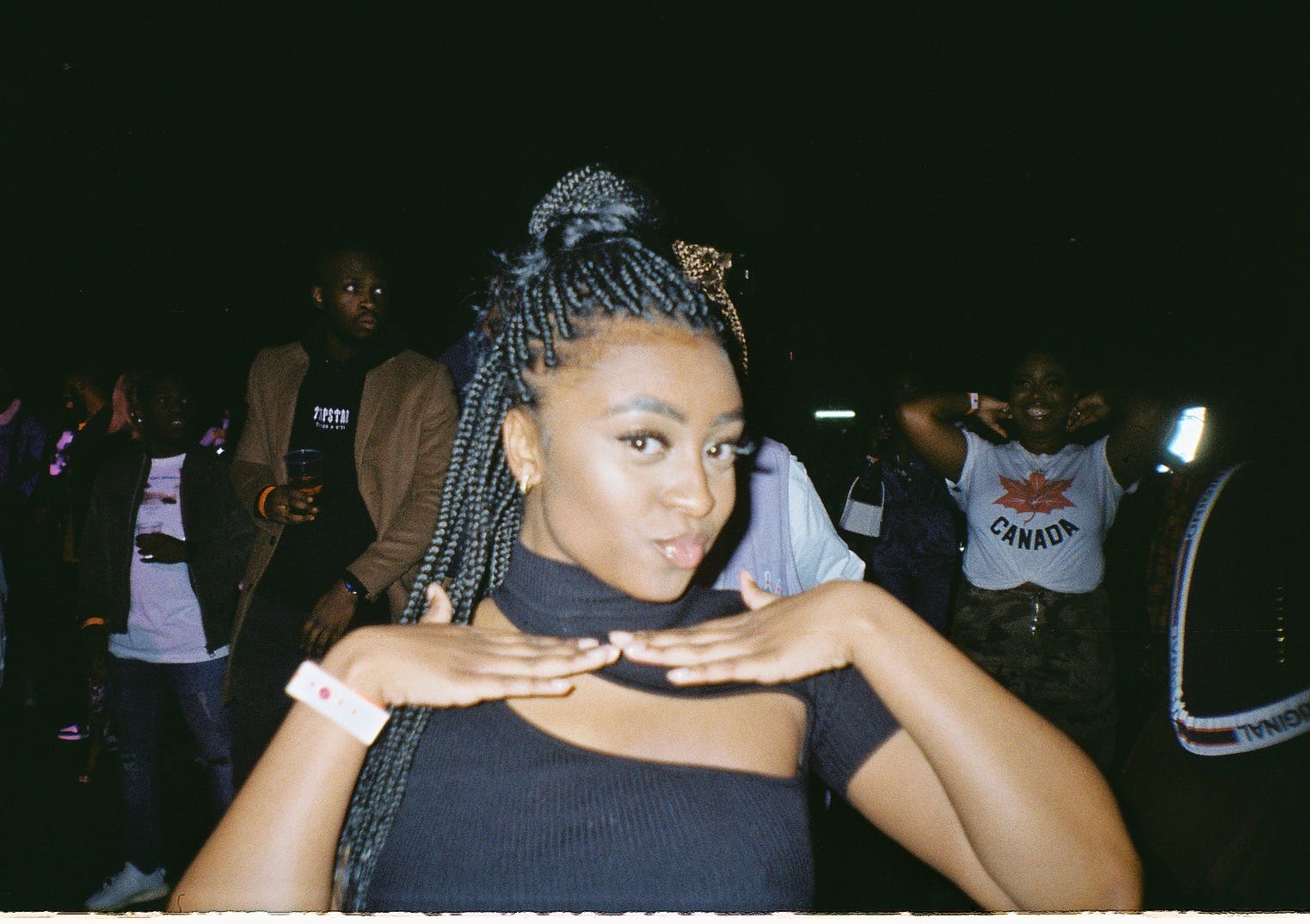 Tice Cin spoke with the music journalist on accessibility within the industry.

Laura Khamis is a campaign-focused young journalist, who’s written for places such as Red Bull, A Nation of Billions and gal-dem. I asked to interview her because of her background in mentoring aspiring writers and also because it can be quite difficult to connect with other journalists. She shared on topics that aren’t spoken about enough within the industry, from safe spaces for interview settings, community amongst writers and political engagement within music journalism. The synchronicities during the chat felt strong, even down to our both being interrupted by small children during our Zoom chat!

Tice Cin: You have a great piece in gal-dem that touches on the financial aspects of being a freelancer – for example, including a late fee in the invoices fine print – what does a sustainable lifestyle as a freelancer look like to you?

Laura Khamis: Reaching a level where you are getting consistent work and having a steady cash and work flow. I think with freelancing it can be difficult because you can have periods where you’re constantly working, or periods when you’re pushing yourself out there and there’s literally no work. Editors and publications need to like your ideas to give you those commissions of course, a healthy workflow for me could be where I place work I want to write out there and get paid!

On a daily basis I’d like to roll out multiple articles alongside related projects that aren’t specific to writing such as visual mediums. Piecing stuff together and working with a team where possible. Also, I enjoy engaging in different types of articles in different sectors, not necessarily just music interviews. I’d like to see it like a 9-5.

TC: The industry can be quite a sexist place as a woman journalist, what are your thoughts on this?

LK: In the environments that I have worked out so far I’ve felt outnumbered, not only as a woman but as a young black woman. I’ve always worked with male editors. It would be great to have more fellow women to work alongside.

TC: I can imagine in music writing it can feel particularly difficult because there’s a lot of press coverage of contentious artists. We often get asked to review male artists who are known as problematic. When you see those artists get sent into your inbox, how do you feel?

LK: I don’t like to write anything that hasn’t got a positive viewpoint. It’s an easier process to write what you genuinely support. I don’t like to start writing on a negative note. At the same time, I do feel we have a responsibility to write on certain things that don’t sit right with you. Especially at this time with everything that’s happening, I do feel obliged to step out there and address such things, to bring attention to them.

TC: Political engagement with the content of songs and the artist’s general ethos is unavoidable in some ways but yet a lot of our writing can have those points edited out at risk of being too ‘heavy’.

LK: It’s hard to have the guts to do so and write what you envision anyway. To give an example of my ideal piece, I’d say when I interviewed Big Zuu; that piece was coming at a community angle that linked back to the creative industry. I love artists who create but also do so much more. Big Zuu does so much for the community. He has a history of youth work, and with everything he does now, that’s always remained so evident, like his BBC 1Xtra live set for Grenfell and his Agenda show on Beats Radio.

When I wrote that piece on Big Zuu, I was in an environment where I had more freedom with what I wrote and what I chose to write. I hope to be more concise, disciplined yet free with what I put out there, pushing out positivity through my writing. In journalism there’s been a lot of negativity, but as emerging writers we have a responsibility to help reshape what we see in media, to portray the young community, the Black community, bringing light to amazing individuals that do good things.

As emerging writers we are trying so hard to attach our names to bigger publications, and now I want to be very selective about whom I write about. When identifying whether publications are for me, I want to write for more publications like gal-dem, places that encourage writing with a sense of activism.

TC: What would you like to see more of in the industry? What would make your life easier in your day-to-day work?

More women on set too! When I do interviews I’ll be working on set and they are more men-oriented, especially if it’s a set organised by a white male editor. Though there are plenty women of colour and Black women stylists, photographers, as producers, assistants … I don’t think I’ve ever been on set and seen a Black woman on set, unless it’s a piece organised by a Black woman.

So in general, I want the industry to have more openness with having other women on set, specifically women of colour and Black women.

LK: I normally try to seclude it. In some situations I found it perhaps intimidating coming as a freelance writer into a big team of people in contrast to my usual solo work. Other times, meeting someone face to face can be easier when surrounded by a whole team. Sometimes live conversation can pan out much better. I prefer face-to-face conversations. On one woman-orientated set it was wonderful, we were all talking about how our day had been and I felt very comfortable.

TC: What do you feel about the perception that women journalists are clout chasers or there to move to the artists they’re interviewing?

LK: You go there to do your job and some male artists feel like its okay to overstep that boundary. Sometimes I even feel uncomfortable talking too much. We all know how that feels. I don’t know how to say it but I feel like everyone has their own boundary set, and though I don’t want to be too quick to think that someone is trying to move to me or being unprofessional but I’m quite weary when someone is overstepping. Not just male artists but men in the industry feel entitled to overstep boundaries that we as women creatives set for ourselves. It’s important that men become more aware of what they are doing in these professional spaces.

TC: The fact that we have to think about who we interview and where we interview them, when journalists who are men wouldn’t even have to consider this, is eternally frustrating!

LK: We’re told not to complain too much but at the same time, these have been our experiences and we should definitely speak up about them.

TC: What advice would you give to aspiring writers?

LK: I didn’t have any journalism training but it never made me feel my ability was any less. My passion for it overruled any fear that I had. Establishing yourself as a freelance writer is the first step. People are so scared to give themselves that title and they feel they need to do a certain amount of work before they deserve that name. If it’s what you want to do, claim it.

Where does your passion lie? What do you enjoy sharing and covering the most? Find an idea of yours that nobody else will have … Sometimes we worry people might not be interested in the person we are interviewing or the article we’re writing but we never know unless we try. Everything I’ve learnt has been through trial and error. Don’t be afraid to contact anyone, from smaller blogs to large publications. Remember: it’s the work that you do that speaks the most volumes.

TC: How about your social media presence?

LK: Before 2017 I used to feel pressure to have a very visual presence; now my socials are more writing focused, I don’t really feel a need to post myself. It has helped having that platform to upload my work, like a mini-portfolio. More recently I’ve felt a need to put a face to my work. It helped not having a face to my work because my work is whoI am and what I want people to see. But it’s important to show our personality and not just be stuck behind a computer so you can show what you wouldn’t necessarily see through your articles. On Twitter, a lot of the writers that inspire me have strong personality and presence – that’s what has brought them a lot of opportunity recently. I’m learning not to be afraid to express my opinions on current topics.

TC: Who are the journalists that inspire you?

LK: Chanté Joseph, she is my fave! I love how free she is with her writing, especially as a Black woman in the industry. You watch her grow as a writer almost everyday and she works in so many different mediums that I’d like to explore myself. Her series on Channel 4 is something that could be labeled as controversial and through that, she had a lot of positive impact.

Twiggy Jalloh, she’s a beauty and lifestyle assistant at British Vogue. What she has done with her writing has been very motivational in terms of how she has shifted things and made an impact at Vogue for Black women and female creators. She has definitely provided a space for Black women and I would like to have that same impact as a Black woman journalist.

TC: What are you looking for from new artists pitching to get coverage in the outlets that you write for?

LK: For me personally, I like someone who is very representative of their community with their work. A lot of the people I’ve interviewed have that, like with when I interviewed House of Pharaohs – they’re so connected to their community and their upbringing.

I like confident people, I can tell when someone has invested their passion, time and effort into a pitch. The work has to speak volumes, more than the email. I like good visuals attached. Being consistent on social media is very important to me, that’s how I get to know more about you before I even speak to you by seeing you dropping tracks, and how you choose to creatively portray yourself. Personality as well, people go viral because audiences see something different in you and in your personality that is worth sharing. Someone that remains true to themselves.

I’m less likely to read a press release and more likely to scout directly. I prefer coming across something that interests me myself. I try to make sure I’m following the right people so I find people through scrolling Twitter and Instagram a lot. So far, I’ve had a good eye at identifying a number of individuals who will be big. When I interview emerging artists, I envision these people having long successful careers as I’m talking to them. When I interviewed Ashnikko at the start of her career I saw something quirky in her that I liked which carried through. I like seeing those journeys. Sometimes one article or interview can be the springboard that these artists need.

TC: A final fun question! What song reminds you of your first initial love for music?

LK: I’ll give you an album: Beyoncé I am… Sasha Fierce. It was the first CD I bought. I’m a big fan of 2000s R&B. That album reminds me of being a young teenager and just being a boss babe. You know Beyoncé is just empowering in a different way!

Tice Cin is a writer and music producer, currently working on digital art at Barbican as part of Design Yourself collective. She shares news of her work on Instagram and Twitter.