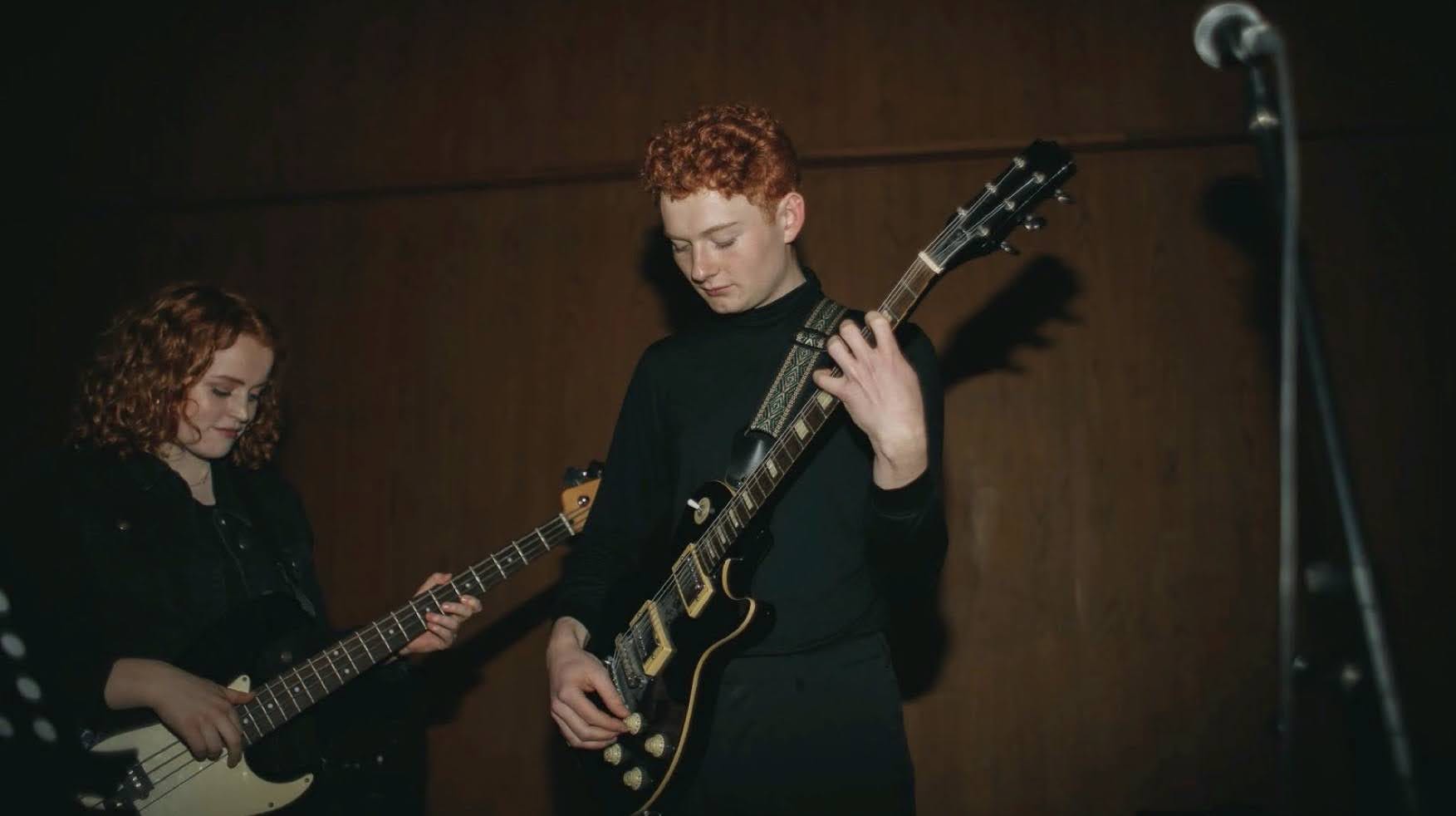 Coinciding with the release of their debut single, Sidney Franklyn takes a peek into the delicate little world carved out by the experimental pop duo.

At the turn of the year, when Ruari Paterson-Achenbach and Joanna Ward were sketching out the first skeletal throes of what would later become the mermaid café’s debut single, the duo could hardly have imagined the circumstances of its release. Billed as ‘experimental pop’, its nine minute run time has no trouble living up to that label. But the real tragedy of “Sideways Knowing Glance” is that the song feels purpose-built for a summer that never arrived.

Light – and the way that light falls – is the cipher that enables us to be momentarily swept into the couple’s domestic haze. We’re lain beside Ruari, who is so entranced by the twilight glowing from Joanna, a soft murmur is all they can manage to catch their partner’s attention. Joanna’s smile mirrors a sunbeam that creeps into their “hiding place”, and we watch it catch the red of her hair. Whether it’s morning or evening it doesn’t matter; neither awake nor asleep, where we are right now is someplace liminal, some in-between space that exists beyond the reach of the world outside the doorway, the world where time is measured up and portioned out.

It’s at around the halfway mark that the ‘pop’ gives way to the ‘experimental’; the steady bass drum falls away as traditional verse/chorus structures are replaced by cooed vocal harmonies set over a choir of synthesised cicadas. The air is so thick with heat, that I’m almost startled by the sound of sleet ricocheting against my window, dismayed to find the dreary skyline I have spent most of the last four months gazing at remains stubbornly unchanged.

In case you were curious, the mermaid café’s name stems from the lyrics to Joni Mitchell’s track “Carey”, a song inspired by Mitchell’s getaway – partly from mounting industry pressure, partly from an ended relationship – to the island of Crete. There she met Cary Raditz, and the two spent the summer together hidden away from the real world: “Come on down to the mermaid café / And I will buy you a bottle of wine / And we’ll laugh and toast to nothing and / Smash our empty glasses down”.

Fans of Mitchell’s work have tried to track down the real café with varying degrees of success. The writer John Steinbreder penned a travel piece titled “Where is the Mermaid Café?” which collated a few possible contenders: Ibiza, Corfu, even Colorado (the mystery might have been unromantically solved in 2018, when a source for The Oldie identified the caf as a victim of Greek austerity, now built over by a restaurant).

While none of these places could all be right, Steinbreder noted that in a sense each one was as valid as the next. Mitchell might have written the song whilst under the Cretan “Matala moon”, but the escape offered by the mermaid café was never really geographical, it was mental. “The mermaid café is anywhere you make it”, as Steinbreder says, “it’s anywhere where you feel comfortably freed from not just the daily but the earthly chores … at least for a while”. What better name then, for a band whose music makes me forget where I am. At least for a while.

Sidney Franklyn: The two of you have been performing covers for a while now, but at what point did you decide you wanted to put out something that was your own?

the mermaid café: We always knew we wanted to write (or devise, or improvise) original material! We’re both composers from a contemporary classical/experimental music background, so that was totally always the plan. We just started playing covers together just to get into playing together, and we’ve recorded and mixed a few more experimental covers to kind of establish a sound, and then it felt like an easy way to get a few gigs and start getting used to performing together at uni to do covers and so we got booked for quite a lot of events. So ironically writing original music took a bit of a back seat! I feel like that happens to a lot of people who want to be songwriters.

We also put on quite a few events as ‘the mermaid café’ at uni which were in a kind of experimental/contemporary music world, where we performed other people’s scores, and graphic scores. And we really enjoy doing that, and that’s very much still a part of what we want the mermaid café as a project to be, but that kind of felt like a more comfortable strand of our practice to pursue whilst we were at uni studying music degrees. Whereas this year, living in London and working and studying, as well as now with coronavirus, it’s been a much more logical context to focus on really honing some original music in a more pop format, rather than putting on events. So even though this was kind of always one of the main aims for the project it’s taken us two years to actually do it!

SF: So when did “Sideways Knowing Glance” start to take shape?

TMC: “Sideways Knowing Glance” emerged from a couple of different places/ideas. It’s a combination of two different songs which Ruari wrote at different points, with some ideas coming together as early as 2018. The lyrics are mainly taken from a simple guitar/voice song which has a completely different melody and feel. Then the lyric “sideways knowing glance” comes from a poem Ruari found on their notes app which they must have written a couple of years ago. They were improvising looper songs with voice, guitar and pedals one night and the poem became the basis for one of them. That particular vocal phrase stuck. It became a repeated idea that kept cropping up in our improvisations. We mainly use improvisation to come up with material and develop our work together, and one day it kind of just came together. It was a very non-linear, collage-like process. It’s been in a lot of different rooms and cities.

SF: Your name is of course a reference to Joni Mitchell, and maybe there are snatches of her in your vocal deliveries. But some of the artists who come to mind when I listen to your single sit more on the ambient pop end of things: Slowdive, Grouper – especially Ian William Craig, who also comes from a contemporary classical background. Who are the musicians you feel most shaped “Sideways Knowing Glance”?

TMC: It’s always hard to pinpoint specific areas of inspiration because often our interests are very scattered and interdisciplinary. It’s often so incidental; Ruari can remember being really fascinated by the combinations of experimental production techniques and very simple love songs by people like Frank Ocean, FKA Twigs, Kate Bush. Then there’s more practice based or ideological inspirations. The ethics of free jazz, improvisation and theatre espoused by the AACM [the Association for the Advancement of Creative Musicians], the vocal inflections of composers like Meredith Monk and Caroline Shaw. Joni is and always will be a huge inspiration in so many ways. Often it’s just a response to the means through which we have to make. Joanna was learning about granular synthesis which ended up playing a big role in the overall sound of the song. All of the stems were recorded and edited once things had already started shutting down because of coronavirus. We only used what we had immediate access to. Our voices, our instruments, our free recording software.

SF: Do you think your recording process will change significantly once lockdown eases? How will it impact your sound?

TMC: Most likely no. We’ve always had quite a DIY practise, out of necessity just as much as intention! We’ve gradually taught ourselves how to do basic technical stuff, use free software and make it work etc. We’ve developed (and quite like) our own idiosyncratic mixing process which is maybe using the software in unorthodox ways (because neither of us are very knowledgeable about sound editing etc.) – we just kind of use our ears and experiment with using effects when mixing (sometimes in ways they weren’t initially intended to be used), I think in a way it suits us to have a less clinical/‘correct’ approach to recording and mixing.

SF: Have you had any ideas of what your future material might consist of?

TMC: We have so many hopes and ideas about what the mermaid café might shape into in the future, but it’s hard to remain hopeful when live performance is being gradually decimated by our government and late capitalism. We want to continue making more original material and finding our own sound, but writing and recording music is just one of the things we do as individuals and as a group. We organise and curate, with activism present in everything we do. Hopefully we can get to a place where we’re not just sustaining ourselves but supporting new artists and creating spaces for showcasing new work.

We’re constantly aiming towards a compositional/curatorial/performative artistic practise which is radical, feminist, queer, anti-racist, anti-colonial and resistive in concept and practice – explicitly and directly political in its aims. We want to be as vocal as allies and activists as we can with whatever platform we have. It’s completely obvious that the way things were happening before coronavirus were in no way sustainable and now most of the few things creative people relied upon to survive will no longer exist. If we try as hard as we can to actively not return to the unstable ‘normal’ of before, maybe we can coax something wonderful into existence.

Released on the 10th of July, “Sideways Knowing Glance”’ is the debut single from London-based experimental pop duo the mermaid café.

Whilst the song has been in gestation for a long time, this release was predominantly recorded and mixed whilst in lockdown in Newcastle. Whilst remaining honest to the mermaid café’s roots in DIY and intuitive music making, this single represents a turn towards pristine post-production shimmer in their sound.

This release is the culmination of two years of the mermaid café performing, writing, and improvising together, developing their songwriting practice. The mermaid café represents exciting, fresh collaborative thinking, bringing together many layers of artistic influence: both Ruari and Joanna do work ranging across songwriting, experimental and contemporary classical composition, multi-instrumental and vocal performance, research, activism, and visual art. Joanna is currently studying Composition at the Guildhall School of Music and Drama in London, and Ruari is working as a freelance musician and writer.

This track was mastered by Jeremy Warmsley, and the group has worked with graphic designer Emily Tonkinson-Sharp to develop the cover art and merchandise for this release.

“Sideways Knowing Glance” is available to stream and purchase on Bandcamp here.

Sidney Franklyn is a freelance writer, specialising in the influence of contemporary politics on internet music culture. As well as being Threads’ Head of Editorial and a member of the Production Team, Sidney is a Music News Writer at MXDWN UK. If you would like to contribute to the Threads blog, you can contact him via the email address [email protected].