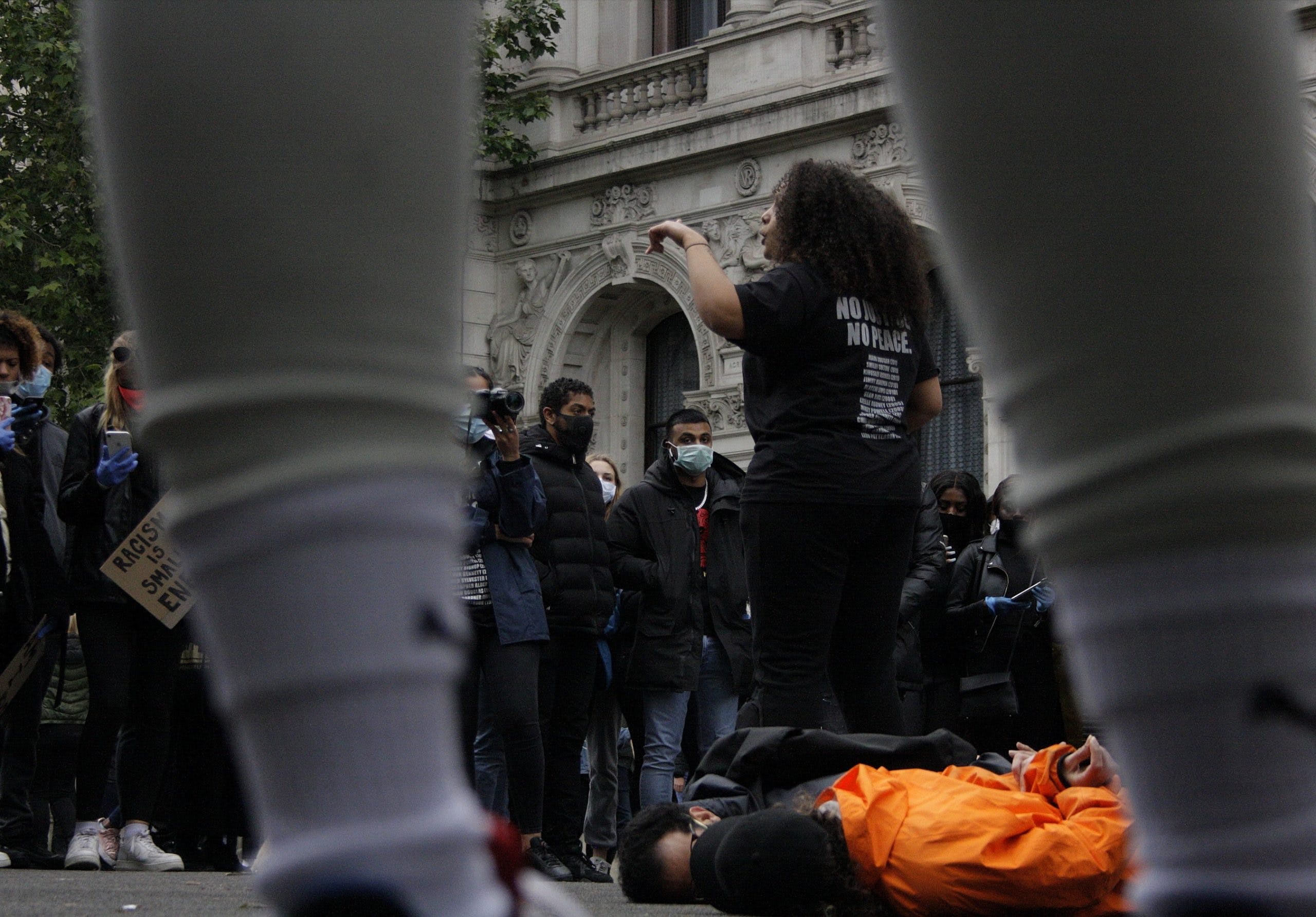 Over the weekend, many UK cities held anti-racism protests following the killing of George Floyd – a 46-year-old unarmed black man – whilst under arrest by members of the Minneapolis Police Department. Regrettably, the brutal nature of Floyd’s death at the hands of a white police officer was by no means a first for the African American community. But the cruelty with which Officer Derek Chauvin used his knee to suffocate Floyd, ignoring the suggestion of Officer Thomas Lane, the screams of bystanders, and the pleas of Floyd himself to stop, all whilst knowing he was being recorded, was emblematic of the complacency felt by the US police in thinking they can use lethal force upon people of colour with complete impunity.

This time, at least, they were wrong. Officers Chauvin and Lane, as well as Officers J. Alexander Kueng and Tou Thao, have all since been stripped of their positions and arrested; Chauvin has been charged with manslaughter and murder in the second degree. We will have to wait to see whether justice will be served. But Floyd’s death nonetheless sparked nationwide protests in the US that have continued escalating into a global anti-racism movement. Black Lives Matter lead the charge, whose core ethos is to denounce the oppressive systematic violence perpetrated against African Americans, and by extension black people worldwide.

Many in the UK have commented on the futility of these protests taking place here. One common phrase we’ve heard used time and time again in British conversations about racism is “we’re not as bad as the US”, as if this is supposed to absolve us from examining the discrimination our own institutions enforce upon people of colour in this country. According to data collected by the Home Office between April 2018 to March 2019, black people in England and Wales were nine and a half times more likely to be the subject of a stop and search than white people, and during 2017-18 were three times more likely to be arrested.

BAME communities count only for 13% of the UK’s population, yet make up a third of deaths following police contact. To the names of George Floyd, Trayvon Martin, Ahmaud Arbery, Breonna Taylor, and Tamir Rice, we have our own: Christopher Adler, Sean Rigg, and Kingsley Burrell just to name a few.

Protesters in London have gathered peacefully, most of them wearing PPE. They have made their way through the designated points of the protest in London, from Trafalgar Square and the US embassy, where they kneeled for eight minutes and 46 seconds; the length of time Officer Chauvin pressed his knee against Floyd’s neck.

Given the current climate, we thought it vital that Threads try to use its platform in the best way it can: lending a voice to those living under systematic racism and those who came together against it. These are their accounts.

“As a citizen in a western country, I’m appalled by the hypocrisy in the UK and the United States. Just the other week they were doing protests because they were told to stay at home for their safety but have a problem when people are protesting for their right to live. It doesn’t make any sense. We’re out here risking our lives so our voices can be heard. And even the ones that don’t mind us protesting demand us to do so peacefully. How can you tell black people to remain peaceful when dealing with their oppressors? Did you see how they reacted to 9/11? They’re still killing innocent civilians in the Middle East in retaliation to that one day, so how do you expect us to respond to 500 years? They call soldiers brave for ‘fighting for their freedom’ what on Earth is their freedom doing in another country? Furthermore, if they want their freedom and their rights can’t they ask for it peacefully like they told us to! The gag is, the reason why they’re arguing with us is because they simply don’t believe we deserve the same rights as them. Simple as. They’re racists who hide behind contradictory arguments and that’s all there is to it.” – Zuhaila Jama

“To think that a person can be subjected to death because of the colour of their skin is sickening to say the least. Now, to understand that this is happening at the hands of the very people called to serve and protect all citizens… it is unacceptable. However, law enforcement is not the root of the problem. No. Racism is an issue which has plagued black people in every area of life imaginable and is not unique to one country. Whether it is education, employment, health, housing or any of the sort, black people have faced discrimination, which often affects their lives… or means their death. Discrimination exists in many forms, this could be verbal abuse, exclusion, physical abuse and in the case of George Floyd and thousands of other black people, murder. We must realise that we live in a society in which the system has been designed by and for white men. You can’t fix something that works exactly as intended, so the idea that reforming our pre-existing system will bring about racial equality is ludicrous. It is a system that was built upon the pain and suffering of black people and that simply cannot be reversed. Engrained ideologies must be completely rejected and we must work together to create a system in which the colour of one’s skin does not affect how they are received in society. If we do not try, we have already failed.” – Esther Ogunmefun (@its_intricate)

“The only thing I’d like to say is that Black Lives Matter [UK] was the most diverse protest I have ever attended and it was great to see people of all backgrounds coming together as one to demand justice and equality for all.” – Giovanna (@giginxv1)

“In my opinion, protests are a powerful thing. They say words have power, they can make and break, destroy and create… Well right now, people are grieving, people are hurting and being involved in protests is a way to express that hurt to a group that’s so high up the ivory tower, they can barely hear us if we speak individually. If you look at history though, they only start to listen when there’s threats of revolution, overturning government etc. In a way I feel as if the democracy they call for, is a type that caters for the liberation of the European/Westerner. Funny thing about democracy, in my opinion, is it was designed to be questioned, right? Giving people the power to choose who leads them, to choose who determines their norms/values. It was created so that people have the ability to question law/governance, if it ever became some sort of the perceived notion it is now. When I protest/riot, I do it because it’s in my RIGHT. Quite frankly, you can really see passive-aggressive racism by the critiques we get for exercising our RIGHT to challenge government. The same government that sides with the oppressor. If democracy is an indication of development, and highlights what a ‘developed’ country looks like, then America and United Kingdom lacks severe socio-political development. They will ALWAYS undermine the BLM movement and attempt to vilify mass gatherings, in order to reinforce this stereotype of ‘thuggish’ and ‘bullish’ behaviour. The BlackLivesMatter movement is intense because the subject of race is vast and really dominates all social sciences (politics, economics, sociology, psychology) etc. To break down society, is to break down every convention and micro-aggression in our institutions. The protests can’t stop here, we have to continue, we have to get even louder because it will take longer than a few convictions and a couple laws passed to truly address the evil, dark, bloodstained history in Europe; the same evil that built their economy, positions them as world leaders in the current global climate, keeps them as permanent members of international governing bodies like UN (United Nations security council). It’s what allows places like America to commit war crimes in the Middle East and human rights violations towards black people in the US. It’s what makes the UK ignore, and pretend their own acts of human rights violations are moot in comparison, commemorate slave traders, euro-centralise the curriculum, demonise the black community through media outcry, mass panic tactics etc… Black Lives Matter is more than a movement, it’s a way of life. It’s never going to stop until everything’s broken down and rebuilt again.” – Fadzayi Mupoto (@FadzayiFaith)

Zuhaila, Esther, Giovanna, and Fadzayi have been kind enough to give their perspective on the ongoing protests, and why supporting them is so vital. As two non-black writers, we wanted to reiterate that showing solidarity to the Black Lives Matter movement doesn’t end at listening to music by black artists, or sharing a black square on your social media.

Meaningful allyship in the fight to dismantle racial hierarchies begins with self education; DJ Blane Muise (a.k.a. Shygirl) recently shared this helpful resource of anti-racist literature to accompany her charity single “unconditional” (of which 100% of sales funds go to BLM and Inquest UK).

If you can’t protest safely, you can write to your MP to address concerns regarding the UK’s shipping of tear gas and rubber bullets to the US, where peaceful protesters are being violently assaulted for demonstrating their right to march (Write For Change have created an algorithm through which you can find your local MP and send an email regarding this issue and the closure of Belly Mujinga’s murder case). You can sign this petition on change.org to demand a halt to the exportation of riot gear to the US, this one to introduce mandatory teaching on Britain’s colonial history, and this one to replace the plinth where Edward Colston’s statue used to be with a memorial to the victims of the slave trade.

If you are able to offer financial support, here are several funds through which you can donate to aid protesters in the US (note: The Minnesota Freedom Fund has advised that they are overwhelmed with donations, and recommended donating to other funds to best help protestors).

– The Atlanta Solidarity Fund is raising bail and bond money for jailed protesters in Atlanta.

– The Black Visions Collective are a black, trans, and queer-led social justice organisation and legal fund based in Minneapolis-St. Paul

– The Know Your Rights Camp is an organisation founded by Colin Kaepernick that provides education and training in black communities and has set up a legal fund for Minneapolis protesters.

This Juneteenth (the 19th of June) you can also support the NAACP Legal Defense Fund – an organisation that has long fought for the legal rights of African Americans and instigated public education toward institutionalised racism – by purchasing music through Bandcamp.

For more ways to help: https://blacklivesmatters.carrd.co/

For a list of black-owned businesses in the UK: https://shopblack.uk/

Alejandra Cabrera Abasolo is a freelance journalist and contributing writer for Threads Radio. She has written for publications such as Mixmag and Vice and is a recent graduate in Journalism from City, University of London. Alejandra has a passion for music and photography, which are the main topics of her work. You can access her recent work at: www.alejandracabrera.com, and contact her on Twitter: @alupicabr and Instagram: @alupicabrera

Sidney Franklyn is a freelance writer, specialising in the influence of contemporary politics on internet music culture. As well as being Threads’ Head of Editorial and a member of the Production Team, Sidney is a Music News Writer at MXDWN UK. If you would like to contribute to the Threads blog, you can contact him via the email address [email protected].