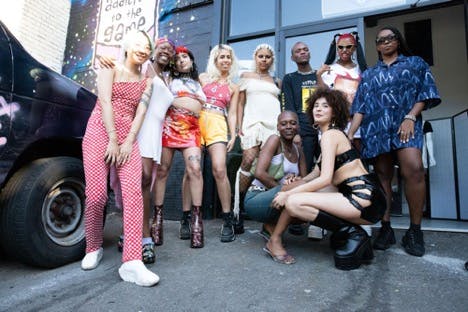 Alex Honey sat down with Luz Angélica Fernández and Ting Ding—co-founders of HECHA / 做—for an exclusive interview at their 4-day pop-up, which showcased their gender-fluid, hand-painted garment brand alongside friends and artists from their community. One of the purposes of the event was to use the pop-up as a platform for the ideas of collaborators that they’ve worked with in the past. 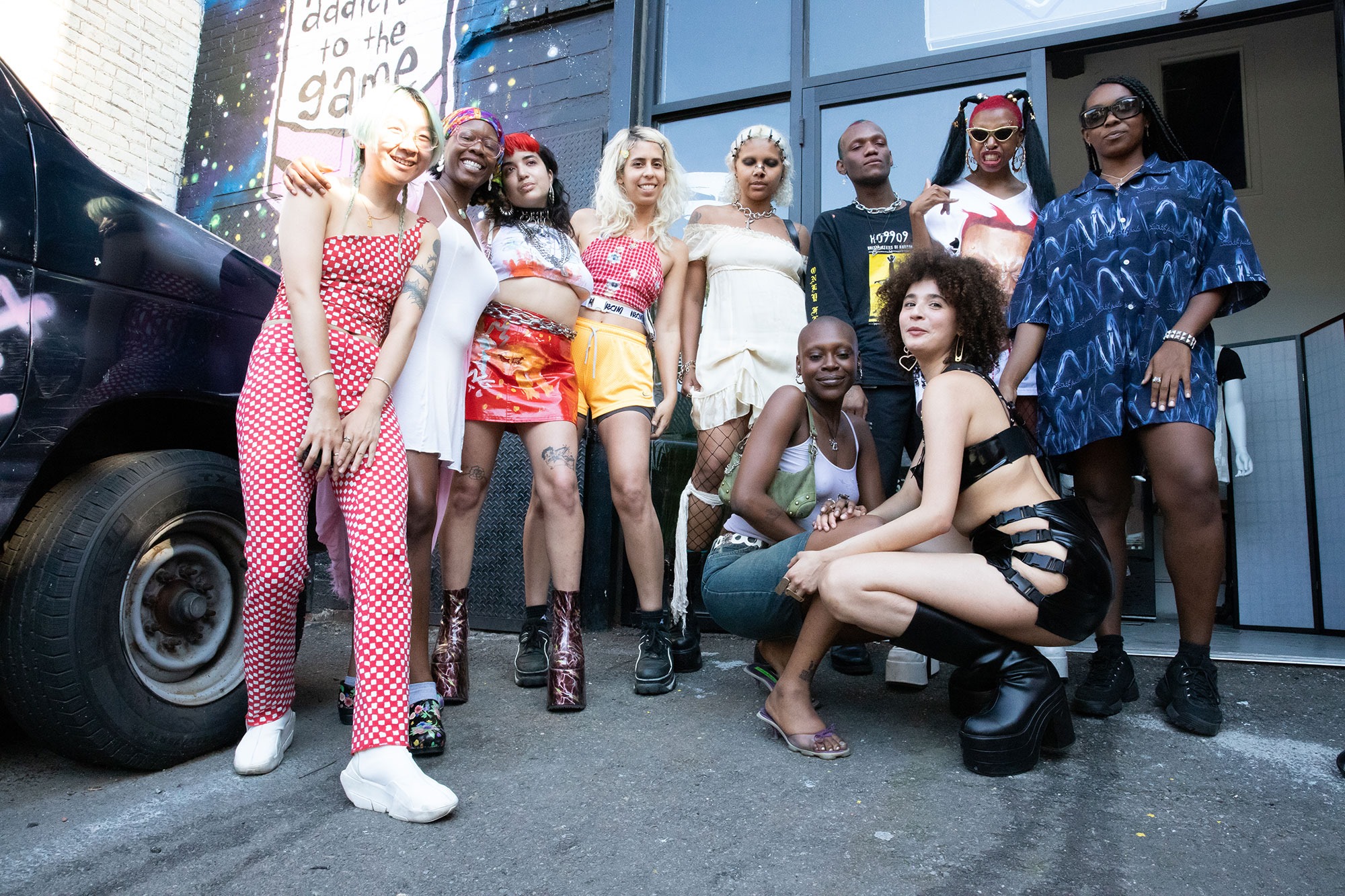 Was there any particular motivation behind bringing together this particular group of artists and musicians?

Luz: It started with what Ting just mentioned—speaking to people that we had collaborated with in the past. For example, people we had photographed before and had modelled with us before, and knowing that they are artists, whether it be musicians or dancers, asking if they wanted a space to be able to showcase something that they’re working on, or just have the opportunity to play for people and use a space for anything they would like to.

Ting: Luz and I are both active in the electronic underground music scene in Brooklyn, which is how we originally met. The concepts around HECHA / 做 started with conversations we would have during raves, so there’s an underlying connection between us, music spaces and our collaborators for the pop-up. 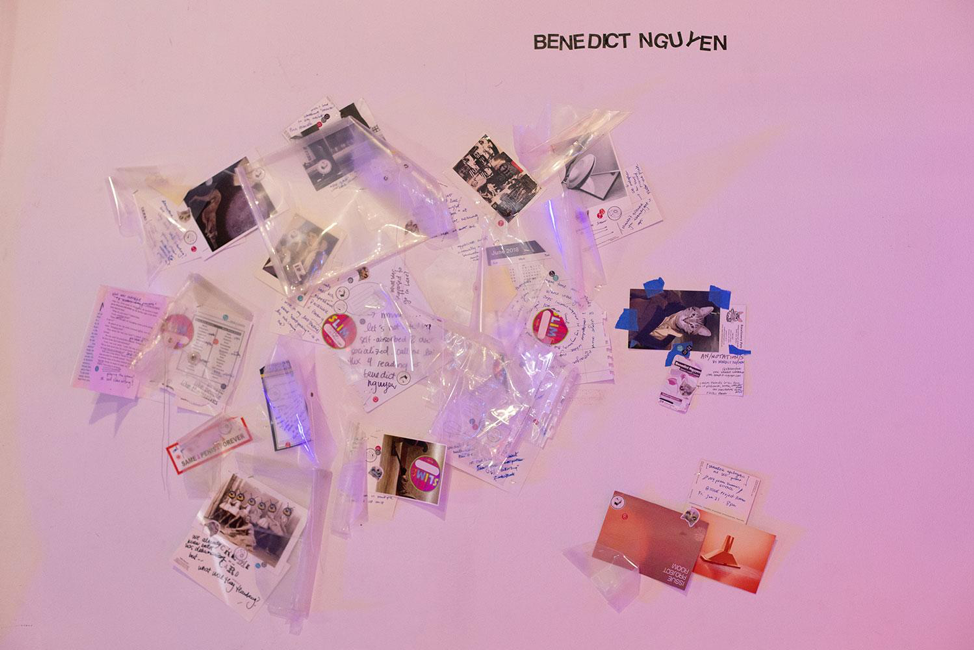 A lot of people move to New York for a lot of reasons. Do you think it takes a conscious effort to form communities in these types of conditions? —I don’t know if that’s a rhetorical question.

Luz: I think that it depends. Sometimes there’s already an active community present and you just have to find it. I grew up in Manhattan, and I moved to Brooklyn after living in Berlin for about a year. When I came home to Manhattan from Berlin, I decided I wanted to have a little bit of a new and different experience here in New York, and change my understanding and knowledge of what it means to live here. So I moved to Brooklyn by way of friends who I went to school with, who were subletting a room etcetera… and I kind of just fell into a friend group that was really supportive and really wonderful, and they led me to this bar called Bossa Nova [laughs]— fresh from Berlin I was really, really into techno, and had been for a few years, and I was like: oh wow, okay, so this vibe is what I’m just coming off of, and this is the only place I’ve been in New York so far which has that same sort of energy. So I really enjoyed going there, and that’s how I met a lot of the people I’m really close to now and love, and hang out with all the time.

Ting: I used to live in Berlin between 2011-15, and actually met a close friend of Luz’ inside Berghain… [laughs], and she connected us when I moved to Bushwick about 5 years ago. I was very lucky in the sense that I was able to kind of slide right into the scene––there wasn’t too much of a change from the Berlin techno scene to Bushwick’s developing electronic dance scene. It was really refreshing to be able to go to DIY parties like Unter, Sublimate, and 285 Kent— all of those spaces that didn’t really exist within Berlin because everything was so institutionalised in terms of the party industry there. 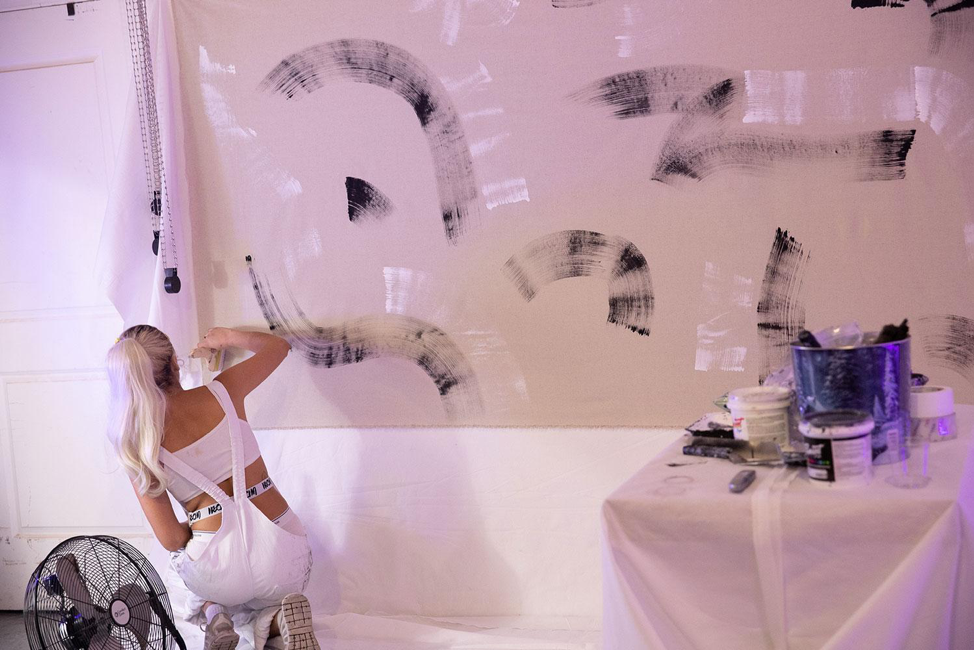 As I understand a lot of these Brooklyn venues didn’t exist until quite recently.

Luz: Well, there are many that have come and gone, and one thing that I’ve had so many conversations with people about is that so many DIY spaces are being closed—there’s been a huge decline in the amount of DIY spaces and DIY options for parties. There used to be many more treasured and beloved spaces that have closed due to rent increases and safety issues. Especially after the Ghost Ship fire, the police in New York started cracking down on all of these spaces and actively looking for reasons to shut them down. Unfortunately now there haven’t been as many of those kinds of parties with that level of freedom and energy and creativeness, and a lot of new spaces have popped up that are more… commercial…

Ting: Formulaic I would say. You know, it’s one of those things…

Ting: Yes [laughs], and they have set hours in which the music is allowed to go on for, in designated areas etc. I think the feeling of going out used to hold a certain level of unexpectedness and excitement that is definitely lacking in the current dance music landscape.

Luz: Right. They almost felt more safe, and definitely more our own because we would have pretty much free rein to do things the way we wanted, and construct these environments and these homes the way that we wanted to suit us, to conform to our personal needs. New venues these days are really just businesses that are capitalising on a certain music scene—sometimes. Not all of them are like that, obviously, but people have lots of complaints about aggressive security in certain spaces, feeling very policed, and just not feeling comfortable unfortunately.

Ting: Despite a lot of spaces making an attempt to establish ground rules and dance floor etiquette, the enforcement of these rules ends up feeling a little bit like policing whereas before safety and comfort was implied by a close-knit community. 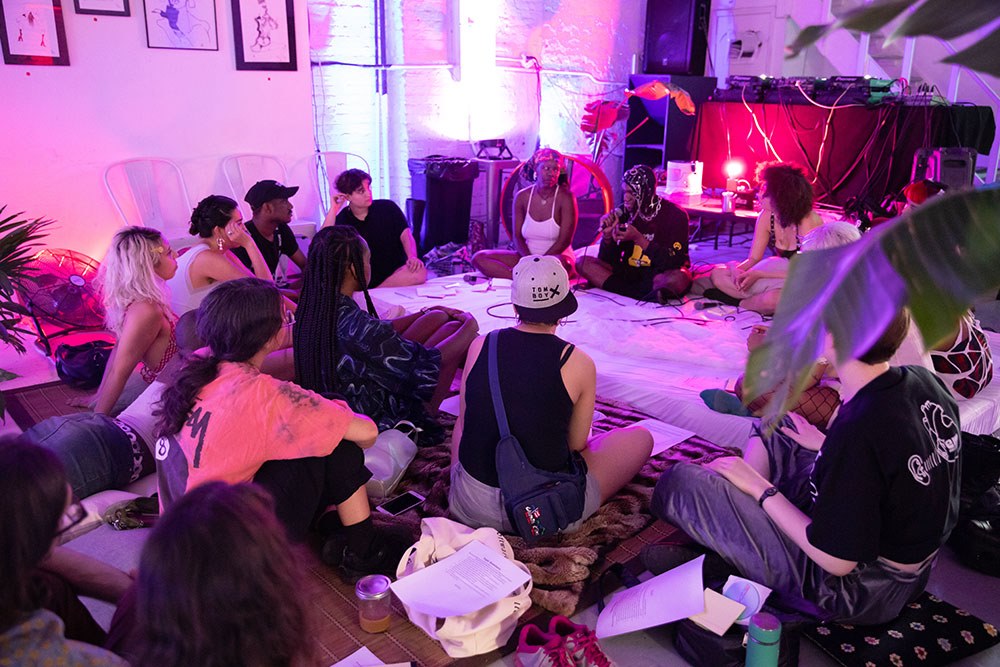 So do you feel that this project is motivated by a nostalgia to bring back or reclaim that kind of underground, countercultural space?

Ting: I wouldn’t say that we’re trying to bring anything back because the way I see it there is no forwards or backwards, in that progressive term. I would say it’s more about creating other possibilities and showing people that there are other ways to enact and formulate these types of communities. We also don’t have a liquor license so we encourage a more BYOB situation. We’re mostly interested in trying to bring people together and guide them offline into real-life social situations. Yes, we use social media to promote the events, but the ultimate goal is to have people come to the space themselves. We do livestream everything for those who have FOMO and perhaps aren’t local, because we’re also trying to be fully transparent and share what it is we’re doing. 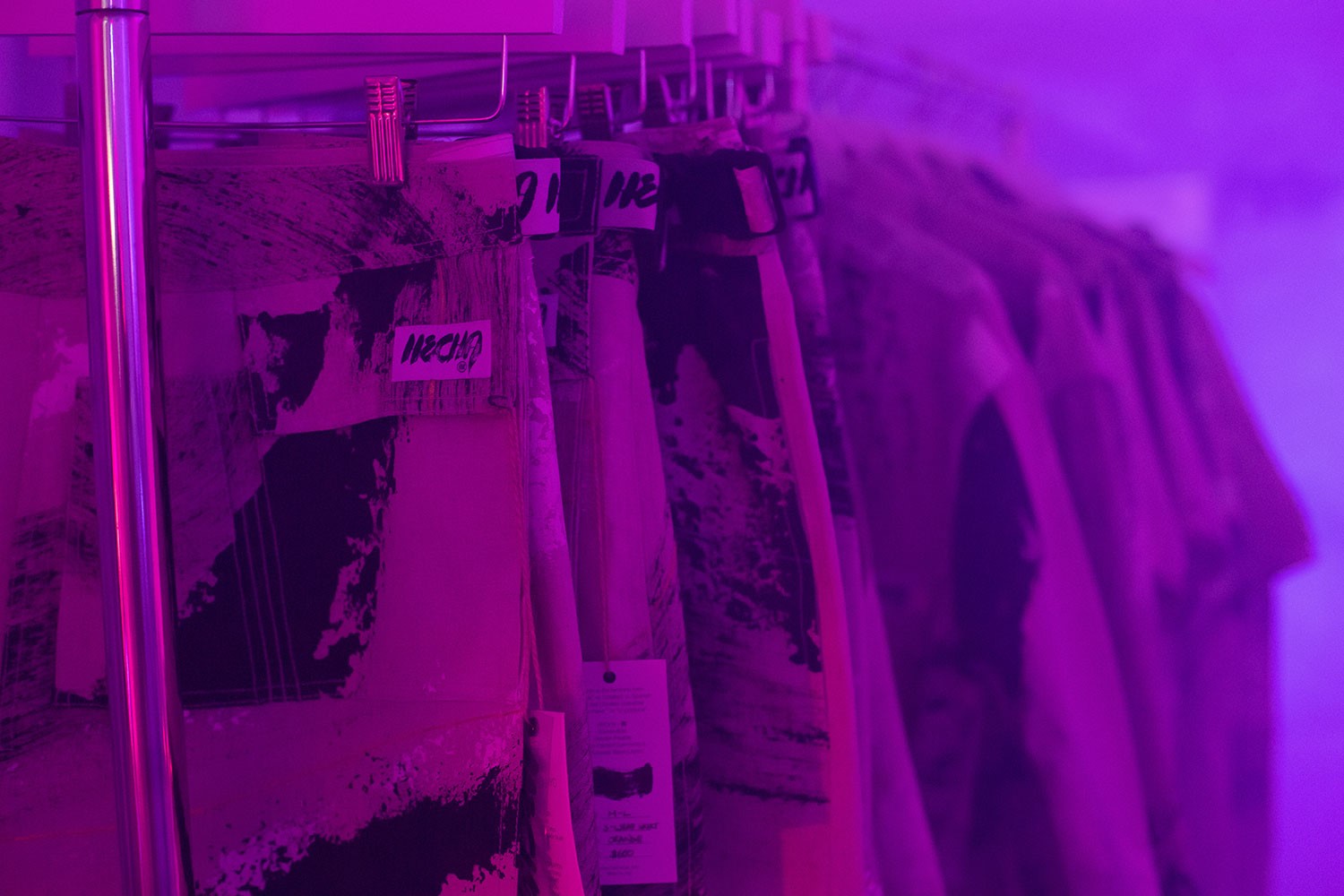 Would you say it’s partly about creating a liminal space within capitalism rather than outside of it?

Ting: I mean, we’re all living in America which is ultimately built on capital, and there’s no ethical consumption under capitalism. We see that there is a younger generation that’s starting to feel a bit guilty about the inherent complicity involved with capitalism, so we’re trying to pursue a sort of softer capitalism. I work a day job as an online marketer, so I see the forefront of what capitalism does and its general mechanical operations. In a lot of ways with HECHA / 做 we’re trying to enforce a more empathetic business model and slowly re-standardise often exploitative industry practices by paying our collaborators or making sure to talk about the context in which the clothes are made. All of this is folded into the ethos of how we choose to run the brand and platform. So yes, it’s still within the capitalistic game, so to speak. Instead of treating people as competition or collateral, we try to collaborate with them.

There’s been a lot of discussion recently around the topic of representation in contemporary club culture. Do you feel that there have been some positive changes happening? 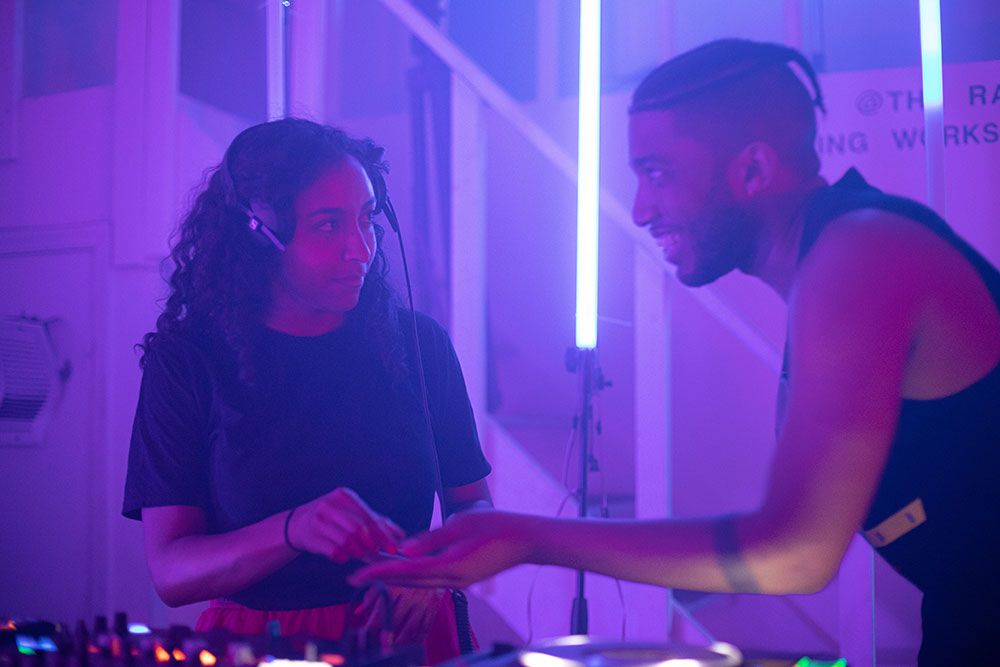 I guess in terms of DJs, but also the broader cultural context, such as the Whitney Biennial this year.

Ting: Whenever the topic of representation comes up—it’s usually discussed by a room of white people who enforce a particularly biased and uninformed idea of what ‘representation’ and ‘diversity’ look like. Both of us are people of colour and at no point do we go ‘we need to get someone of X background on the bill for Y reason’. In fact, it’s rather about trying to work within the group of people whose work we already know and value, and our choices often depends on what type of space and context we’re working in. We don’t operate on an idea of trying to fill a gap based off of someone’s specific race, gender, sexual preferences, orientation, all of that…

Luz: Right, exactly. There are a lots of brands or parties or organisations, corporations, that are recently very focused on making people of colour, queer people, or disabled people visible in a way that seems a little bit exploitative. It really just depends on how you approach that and whether it’s really an attempt at saving face, especially if your practices in the past have been very… I don’t know what the word is… ‘not diverse’ [laughs].

Ting: At the end of the day when you put these people on are you paying them? Are you giving them jobs? Are you actively consulting them and compensating them for their labour? Oftentimes QTPOCs are used as trendy content and churned through a marketing system and given exposure or “clout” rather than any sort of actual compensation or position of agency or power.

Luz: Offered exposure, networking opportunities… things that are kind of intangible, and acting as though it’s doing them a favour while benefiting from their optics, basically. One thing that we’ve thought about with the people that we work with is trying to ensure that they have agency over their own representation and can choose how they want to appear, the type of content they want to be involved in, how we use it, etcetera. It’s about making sure that people aren’t just being used as live mannequins.

For more info on HECHA / 做 or to browse their clothing line, visit their website.

Alex H Honey is a researcher and producer based in Brooklyn, NY. He is the host of Consciousness Raising™ on Threads Radio, and has performed and and released music under the aliases a.h.h., DJ Ketosis, and classtraitor.