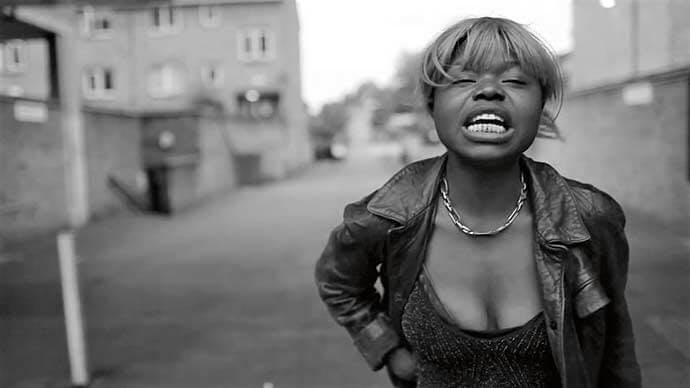 ‘Rebirth’ by Farai: a taste of courage and compassion for hard times.

A year on from its initial release, Sofia Lyall reaffirms the album’s relevance to the current crisis aggravating austerity’s wounds.

“Times are hard in the ends man/When will it fucking end man“, asks Farai on “This is England”. The words are accompanied by deep, warping synths and a pulsating bass that match the rage running through her blood. In the song’s music video, Farai directs her fierce words to the camera, confronting her audience. Shots of the St George’s flag entangled around a flagpole intersperse the video. Rebirth is fuelled by Farai’s anger toward UK politics. She asks with contempt, “Miss May, who’s to blame for all this fuckery?“.

Though I have turned to this debut album often in the past six months, asking myself why has been difficult to answer. Rebirth is complex and contradictory. Released on Big Dada in 2018, it is an intensely political mixture of spoken word, punk, post-punk, and hip hop that intertwines fierce lyrics with beautiful melodies and powerful synths. After thinking for some time, I decided Farai’s outspoken anger is definitely one reason.

Farai does not shy away from pointing out the injustice she sees in the society she grew up in. Opening track “Cray Cray” situates the album in London from the beginning. We hear a sample of a newsreader asking, “Can you tell me why, during the trial, you didn’t give evidence?” Somebody responds, “Well, we were advised by legal people not to give evidence.” With a short sample of an interview with someone who has been unjustly convicted, Farai sets the tone for the whole album.

Though much has changed politically in the UK since the years leading up to the album’s release, it seems that everything Farai criticises has become more glaring, its wounds deepened. In the crisis of the current pandemic, we are facing the culminating consequences of Tory austerity measures, constant privatisation and years of acting out of ‘financial necessity’. “Opinions are not facts”, Farai tells us bluntly on “Lizzy”.

To Farai, UK politics are too absurd to be true, too dire to be able to comment on and too disheartening to rally against. The only apt response in the wake of austerity cuts and the 2016 Brexit referendum is the despair and anger that Farai fuels into Rebirth.

While Farai knows that we cannot rely on our government to provide support, she asks us to continue fighting regardless. She knows that staying angry at the injustices pervading British society is too important. “From the commoners/This is England”. I admire Farai’s anger. She refuses to give in to resignation.

There are strong elements of punk throughout the album. The sonic palette of “Punk Champagne” lives up to its name with producer TØNE’s gritty synths and stripped-down drum kicks accompanying Farai’s confrontational lyrics and furious vocals. TØNE (real name Basil Anthony Harewood) who shares a studio with avant-garde composer and producer Mica Levi, uses his collection of 80s and 90s synths to echo Farai’s punk spirit as she shouts: “Poor rich boys, poor rich girls/We could be sipping on this punk champagne”. The song is a call to action: “It’s time for the bright young things to rise”.

But Rebirth is also deeply personal. Born in Harare, Zimbabwe, Farai Bukowski-Bouquet moved to London as a young teen, turning to music in 2012 as a form of therapy to recover from burnout and poor mental health. She began to make music and started attending the Shop Floor Sessions, a series of open mic jams at Elephant & Castle. It was through these sessions that her and TØNE first met.

Rebirth is the result. It expresses Farai’s experience of living in London as part of the African diaspora. It discusses her most painful moments and her lowest points. It expresses her personal recovery and the role that music played for her. The album is Farai’s own rebirth.

I suspect Farai’s compassion has also played a part in turning me to this album in recent months. Rebirth is both brave and beautiful. When the UK plunges to darker and darker times, Farai knows that compassion fosters care, cooperation, and healing. When the state fails us, the ones we love are more important than ever. In a painfully beautiful melody, Farai tells the story of a woman named Talula: “Hallelujah, I’m Lula, Talula/The baddest girl in town”. “Free like a bird, higher and higher”, she continues, “Never ever blinded by love/Never ever drunk by love/Wild girls don’t get the blues”. Accompanied by only the gentle strumming of a guitar, Farai’s vocals are beautiful, powerful, fragile. “Radiant Child” concludes the album on a similar note, with Farai telling us: “I’m gonna run to nirvana/Love is a drug and I am a drug”.

In Rebirth, Farai takes us by the hand and encourages us to wander here, there, and everywhere in between. She creates an experience that is complex and contradictory, but honest and unafraid. A deep love for the things we find valuable in our lives constantly underlines Farai’s fight. It is an experience that we ought to embrace more often.

Sofia Lyall is a writer and student, specialising in film. She is currently based in Cambridge, UK. In her spare time she enjoys walking in forests and electronic avant-garde music. Follow her news on Instagram.