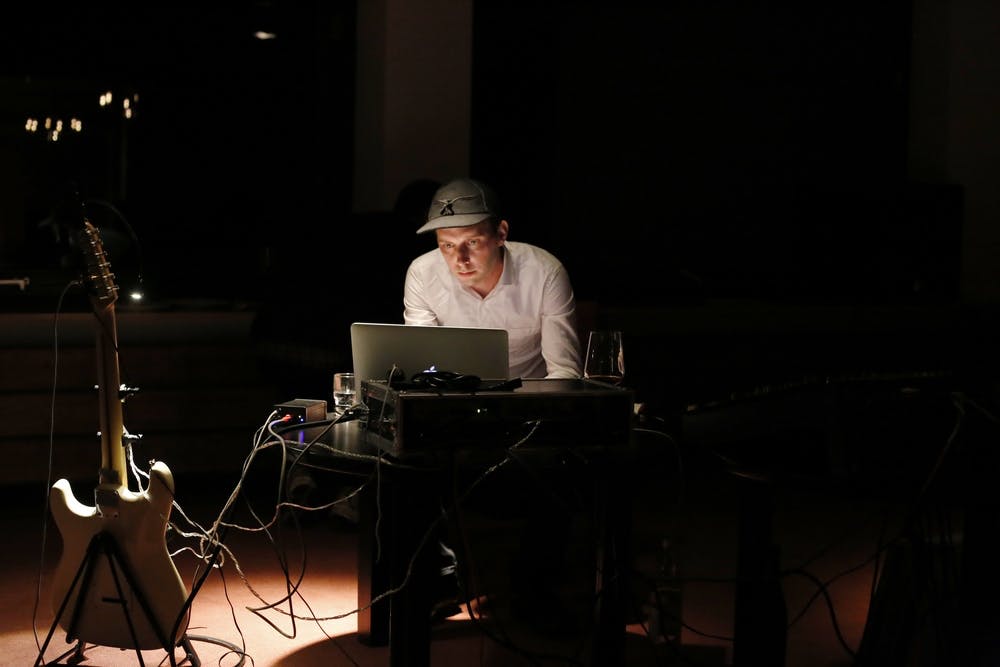 Konrad Sprenger is the alias of Jörge Hiller a composer and instrument builder who has collaborated with such well regarded experimental music makers as Oren Ambarchi, Arnold Dreyblatt and Ellen Fullman. In 2017 he released Stack Music his first solo album of compositions for multichannel-computer-controlled guitar on Berlin’s PAN. Stack Music’s mechanical nature, its complexity and precision evoke minimalism, krautrock and techno.

For the first of our Recorded Research series we asked Jörge to make a mix of music that influenced him and the result was an hour of music made by machines, not electronic but mechanical music, from player pianos to mechanical birds and speaking machines. He provided us with an extensive track list so you can continue your own research at home.

It would be more accurate, actually, to think of this not as music for three pianos, but for one piano with 243 keys.

“DEUS CANTANDO” plays with the interpretive capacities of the human brain. Transcription software makes it possible to reconstruct the frequency spectrum of a spoken text by means of a piano. Winfried Ritsch’s computer-controlled piano performs the “composition” with consummate precision. Each one of the 88 electromechanical fingers is capable of up to 16 keystrokes per second. The interpretive capacities of the human brain then transform what were initially abstract musical structures into a sequence of words in a human language.

The machine is arranged like an organ, with a pipe for each speech sound. Each pipe consists of a noise-maker – a reed or whistle – and a resonator formed like the inside of a human mouth. This resonator filters the noise into a speech sound.

The machine has a vocabulary of a few hundred words in English. It can also recite the alphabet and count to 100 in English, German and Japanese.

DeMarinis’s exploration of synthesized voice and the digital analysis and manipulation of speech sounds.

Engineers at Kagawa University in Japan are developing a talking robotic version of the human mouth:

To enable the robot’s speaking abilities they used an air pump, artificial vocal chords, a resonance tube, a nasal cavity, and a microphone attached to a sound analyzer as substitutes for human vocal organs.

The robot’s mouth and tongue are made from silicone rubber. The inside of the nose is made of plaster, which give it similar characteristics to the human nose.

It consisted of a bellows, a reed and a simulated mouth (made of India rubber for creation of vowel sounds via manipulation by hand), but also included a „throat“ to which a “nasal cavity” was attached (complete with two “nostrils” for making the “n” and “m” sounds), as well as several levers and tubes dedicated to “s” and “sh” sounds, a rod that would interfere with the reeds vibration to make a rolling “r” sound, and a separate, smaller bellows that would allow air to pass the reed while the mouth was completely closed (a feature required for the “b” sound).

The Bell Telephone Laboratory’s Voder (from Voice Operating Demonstrator) was the first attempt to electronically synthesize human speech by breaking it down into its acoustic components. It was invented by Homer Dudley in 1937–1938 and developed on his earlier work on the vocoder.

The Voder synthesized human speech by imitating the effects of the human vocal tract. The operator could select one of two basic sounds by using a wrist bar. A buzz tone generated by a relaxation oscillator produced the voiced vowels and nasal sounds, with the pitch controlled by a foot pedal. A hissing noise produced by a white noise tube created the sibilants (voiceless fricative sounds). These initial sounds were passed throughband pass filters that were selected by keys;The filters were controlled by a set of keys and a foot pedal to convert the hisses and tones into vowels, consonants, and inflections.

This was a complex machine to operate. After months of practice, a trained operator could produce recognizable speech.

DeMarinis’s exploration of synthesized voice and the digital analysis and manipulation of speech sounds.

Vocaloid is a singing voice synthesizer software that enables users to synthesize „singing“ by typing in lyrics and melody.

A piano roll type interface is used to input the melody and the lyrics can be entered on each note. The software can change the stress of the pronunciations, add effects such as vibrato, or change the dynamics and tone of the voice.

A Mechanical Singing Bird Cage Music Box, usually rectangular-shaped, which contains within a miniature automaton singing bird concealed below an oval lid and activated by means of an operating lever.

Its origins are found in the city of Geneva and its invention in 1784/85 is attributed to Pierre Jaquet-Droz.

Ground-dwelling Australian bird that is most notable for their superb ability to mimic natural and artificial sounds from their environment.

All of the metronomes are started as simultaneously as possible. As the metronomes wind down one after another and stop, periodicity becomes noticeable in the sound, and individual metronomes can be more clearly distinguished.

The Study No. 11 is an isorhythmic study which uses a technique from the 14th century motets. It uses conventional notation and features a sequence of repeating 120 chords. There are up to thirty tempo changes in the first page alone.

It would be more accurate, actually, to think of this not as music for three pianos, but for one piano with 243 keys.