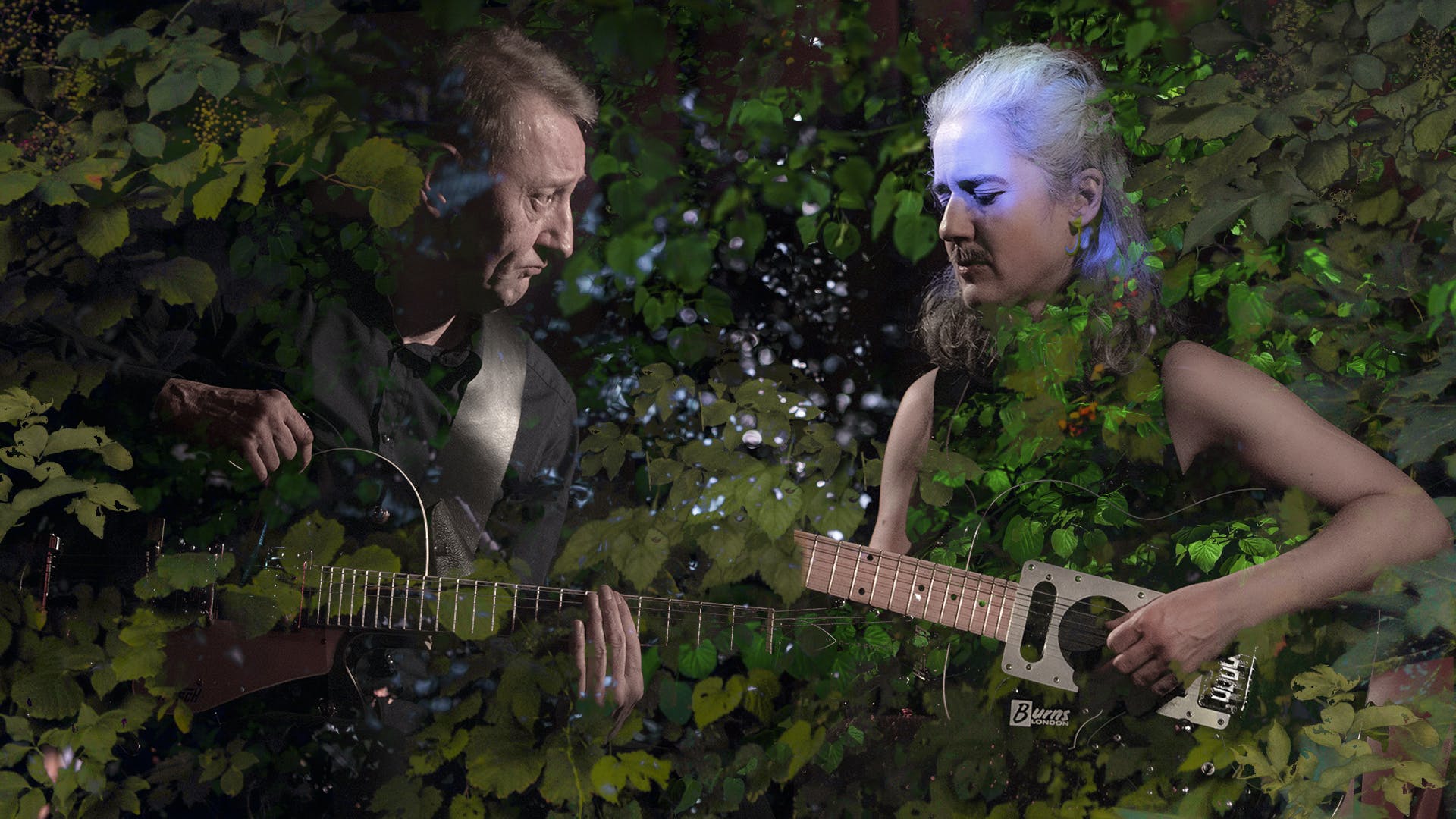 REVIEW: Give Guitars to People’s “Kinetrix” at Xenomorph Sounds

“Nothing is about you. Everything is about us … We are fluid”. Kinetrix, recorded at ausland in Berlin, is a performance by the guitar-probing, modular-shifting Give Guitars to People, a binary partitioned audiovisual concept that connects people to sound via improvised research. Premiered at Kino Corso/ArtsForum and Meakusma (Belgium), Kinetrix launched the full stream via Xenomorph Screenings by Sud Sonico (Italy) (audio + video) and Threads Radio (audio only) last December.

Jochen Arbeit and NATürlich are the madness behind the method – and I did intend to capsize that idiom. For the forty minute or so viewing it became increasingly apparent to me that nothing seemed quite as it should be. But with the idea of what we should hear and see is where things deny difference. From the prelude of the daintedly-fabricated sky to the inception of two chickens inquisiting with the lens, the elements lapsed like a skitting memory passing between life, death and rebirth.

I don’t know anything about guitars, nor can I transpose my skewed vision to identify the modules and pedals which endlessly wind the work of the former together. Why am I writing this review when somebody could explain the sonorous techniques that would make for an educational piece, a structural dissection of knowledge transmission? For me it’s not about exposing the creative concordance of Jochen Arbeit and NATürlich. This performance hands itself to people and their perspectives, reaching for laboratorical surveillance.

The remote concert begins with a calm but exposed richness as a distant right pan frequency tugs on the spectrally turbulous weight of a fabricated world, rotating slowly enough to equalise a calm and frantic mind. Ripples of gaseous matter simmer like an aquatic serpent, collectively binding ear to eye. The weight of the world moves; but you, a listener and participant in this performance oddity, are suspended in the stratosphere. The gravitational anchor is in your mind. There’s a cohesion of natural cues and inexplicable wonders to complement the crescendo and diminuendo of ample string hums tirelessly sauntering through your body. The visual effects are charismatic of a retrofuture screening, stripping back complex ideas to digestible confusion, simulant of an avant-terra renaissance.

So far I have centralised the visuals that accompany this virtual screening, but that is not the focal point; they make no sense without the music, but the music makes sense without them. What picture would I paint in my mind if I were sitting in an auditorium stripped back to a blank slate? If anything, I wish I had closed my eyes first in order to compare both listening experiences in an attempt to understand different angles of sensory stimulation. This is only possible given that I can fast forward, rewind, pause and play. But would that excel or hinder the performance? Are we as listeners more in control of our musical experiences than ever before? Instead, immersed in my one-time viewing, I am present in a lucid realm, suspended in the air gently rotating on my axis. I am hugged by a soft breeze, cinched between a cranial cavity, unsure which route to take next.

Without an eye, you’d think this was the work of a contemporary orchestra, for the work of Give Guitars to People emulates a symphonic rehearsal: musicians tuning their instruments, falling in and out of harmony. We see harmony as togetherness, but there can be just as much cohesion in dissonance. Without the melancholic swelling, I’d be far too relaxed. The performance is personified by the steady balance of buoyant and dolorous sound, a grounding of static lasers that could be likened to a train passing through a rugged electricity line rather than celestial transport finding its way home.

Throughout the performance, electromagnetic rays shift like they are neurological pathways inside the guitar strings, contorting and tightening like muscular spasms. The fluidity of Give Guitars to People’s message renders through its ocular contamination as the frequencies obtain a similar mercurial stature to the curiosity of the chickens, amalgamating life and science. We might only be beginning to understand how this performance pieces together through its resonant healing properties, though it is without disruption that this voyage can only make sense.

You can stream Give Guitars to People’s Kinetrix via ausland-berlin.