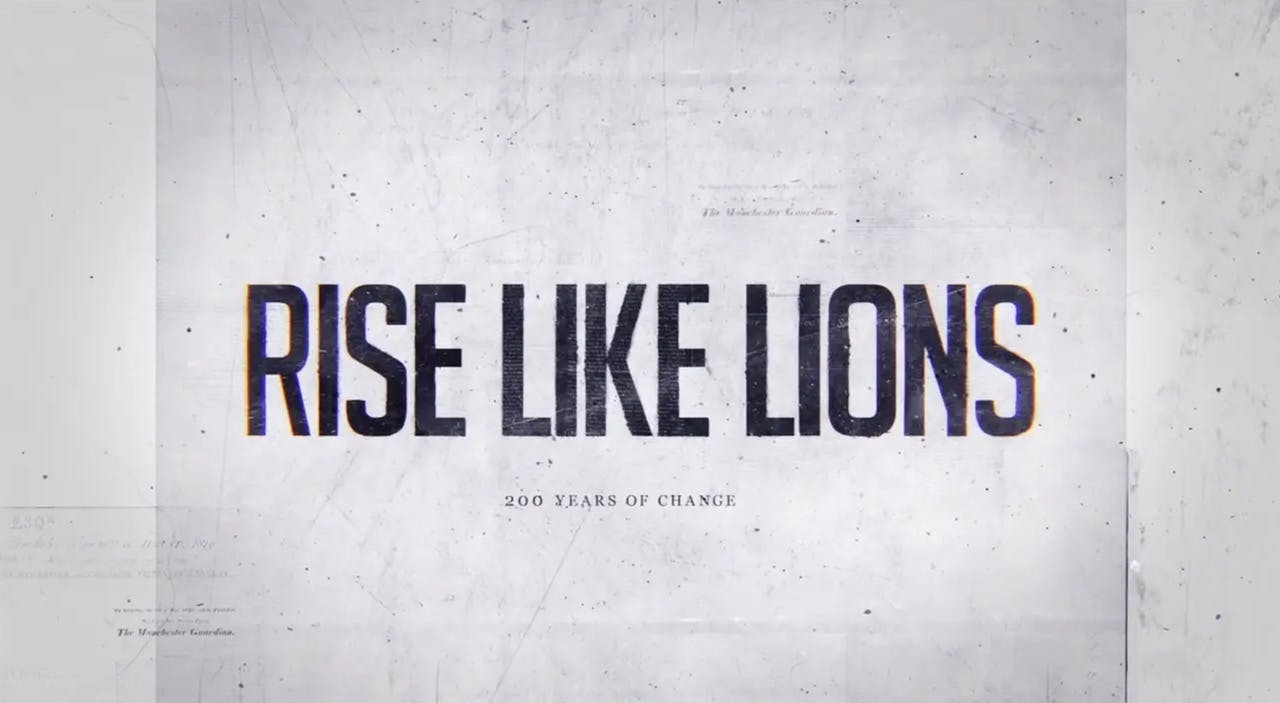 Introduction: I’m in conversation with Jude Greenaway, half of Greenaway & Greenaway who are the visionary creatives behind Rise Like Lions, an audiovisual exhibition exploring the Peterloo Massacre in Manchester, 1819 where people wanted parliament to reform. Individuals of the public wanted change and more rights for themselves which eventually, whilst in protest, the cavalry dispersed the crowd which lead to over 700 injuries and 18 murders. The exhibition started on the 6th of July 2019 where not only was Greenaway’s powerful visual shown, many others joined in poetry and music to talk about the events of Peterloo Massacre. We talk about the importance of protests, the creativity behind the exhibition amongst a variety of interesting topics.

Thank you for talking to me today. Our readers and listeners at Threads Radio are passionate about social change and ultimately positive political outcomes. First and foremost, how did your career begin?

My background is in graphics and film where I studied a BTEC, leading into a degree in animation and graphic design. Whilst doing that, I was very passionate about music so I would DJ, perform live and make my own music which turned into a sideline passion. After finishing my degree, I then did a Master’s in Fine Art Video Installation. My passions have always been around audio visual production and experiencing the viewer engagement in the work. In 1999, I worked with a collective where we made club visuals which then mutated into abstract documentary work. After this, I started a company with my brother, Joe called Greenaway and Greenaway where we work together. Today, we conceptualise, edit, direct, animate and produce music, catering for a wide range of projects.

As an experienced audio visual sound designer, how did you come across this project?

Joe and I did a project at the beginning of the year where we were commissioned to make the opening film for the Borough of Culture in London. It was a big project for us of six months work, where the film was shown projected on the town hall which is a massive building. It was a big undertaking however got a lot of good feedback and reviews. On the back of that project, that is where The Guardian’s event team saw it, contacted us directly to see if we were interested in making a film about two hundred years of protests which we were very excited about.

What were your main ideas behind the exhibition to ultimately portray the protests that happened on the day of the Peterloo massacre? Was there a specific creative process that helped you navigate through it?

We were set a brief to follow to. The Observer and The Guardian was formed from the back of the Peterloo Massacre thus having the link to this event. What The Guardian wanted to do was to show the film at The Manchester International Festival which happened a few weeks ago. The film was to essentially show the last two hundred years of protests and change, showing how people come together to make change within out societies. Our short film is designed to rouse emotion, giving the feeling that people have the power and can come together to make change. The premise of the film is a timeline, starting with the Peterloo Massacre in 1819 right up to 2019. We chose twenty events throughout the last two hundred years where people had an effect by using protests. Some cases were quite violent where others were peaceful. It briefly talks about what happened in those events but it’s more about the emotion and power the people have. It was initially played at Festival Square in Manchester followed by chosen speeches and poems throughout the last two hundred years. One of the poems being The Masque of Anarchy, written in 1819 where the line, Rise Like Lions, was taken from that poem. It was very successful with a. Good crowd. It’s being played again on the anniversary of the Peterloo Massacre, 16th August. It will also be put onto The Guardian’s website as well as one of the sponsor’s, Manchester’s Histories.

I truly do believe that especially in today’s age, using creative outlets such as music, writing and film can let us understand what’s happening around us more. You’re an individual that’s doing just that. Is this the first time your work has revolved around political history or issues?

We have recently done a project with Safe Passage who work with bringing refugees into the UK, making a film with them which was about the anniversary of when the first refugees came into the UK. It was an interesting insight into that kind of world. I think the use of visual storytelling and emotive, engaging soundtracks can really help educate and engage people into history as well as making it interesting to watch, making a revisit to an important part of time.

What those people went through during the Peterloo Massacre in Manchester was shocking however inspiring to see how they all came together to stand up for their rights and lives. What does this event mean to you?

To be honest, I didn’t know too much about the details. I remember some of it in school however when we started this project, it was educational to us to go through this as we spent weeks on researching it and other events. It was quite an eye opener to go through these events like the Women’s Suffrage, votes for women, the national hunger march, the socialist protests, going through various others like the miner’s strike. It was distressing but good to see the people’s power.

Do you think there are links to present political unrest with Brexit, for example? Seeing that there’s a huge division of people on concerned sides, do you think we’re going backwards, perhaps to the days where parliament still overpowered the people?

I truly believe that there is a massive amount of people that don’t understand how much power the people have when we come together. If you are recent protests such as Extinction Rebellion for example where it’s the kind of movement a lot of people are behind whether they’re physically protesting or not.

What are your views on protests in the modern day? Are they a necessary thing to do to stand up for one’s self, especially towards the government ruling over us in ways most of us disagree on?

A lot of youths are making this important as they are the future, connecting with the issues so they then make peaceful protests to make a change. Our film is reminder that this has been happening for centuries and it’s important to keep that movement of mass power against the government. The notion of protests itself is evolving with more young people going onto the streets. It’s not neccasrily causing trouble, it’s hands in the air, numbers of people showing their way of communicating. It looks positive.

Manchester is known for its artistic flair and strong community. Not only was it clearly shown back at the Peterloo Massacre but with the events of the arena attack in 2017 where everyone truly came together to help one another out. Do you think the arts plays a huge part in that for the community such as your exhibition?

I think, just from my personal experience, Manchester has always been a big, cultural town in the UK. Arts and culture is really important. A lot of people snub and sneer it, thinking it’s a waste of money but I think if done correctly, it can engage young people and open people’s eyes to looking at things in a different way. It’s a language to communicate to people who wouldn’t talk about certain subjects. It also depends where arts and culture is displayed. For example, Manchester International Festival which is free. Anyone can walk in, watch a film, look at a painting which is crucial for enjoyment and education.

Going back to your work. You’ve worked for various diverse clients in different sectors. For artists who are looking into this line of work, what techniques or advice could you give?

Recently, we’ve been doing a lot of pitching for fairly sized projects. It’s hard work when you’re pitching and you don’t get something. It is competitive. Both Joe and I are passionate about our work and creativity. Our work stands over a wide range of subjects from an art installation to editing a product film or music video. It sits in with the audio visual world.

Are there future projects we can look forward to?

We are planning on updating our website with a new show reel where we will put up projects that haven’t been seen on the website before. We’re excited about that. The film for the protests is being played on the 16th of August in Manchester but will soon be available online (link to follow!)

Lastly, What message do you have to give to our readers who are interested in this event or your work

I have my own show on Threads Radio on Monday from 4-6pm, once every four weeks. It’s called Depths of Field. It’s usually a guest and myself, exploring all types of electronic music. Feel free to lock in and send me a message. Check our current show reel on our website (www.greenawayandgreenaway.com)

Author: Dominique de Comarmond is a South African born Artist, Songwriter and Journalist from London. Her passion for writing started at a young age of seven where she wrote novels, poetry and stories. She currently studies music, performs her own songs as well as writing on her own independent music blog.The main focus being independent, diverse artists emerging in the industry with creative writing thrown in the mix. Catch up with her blog and social media via the links below