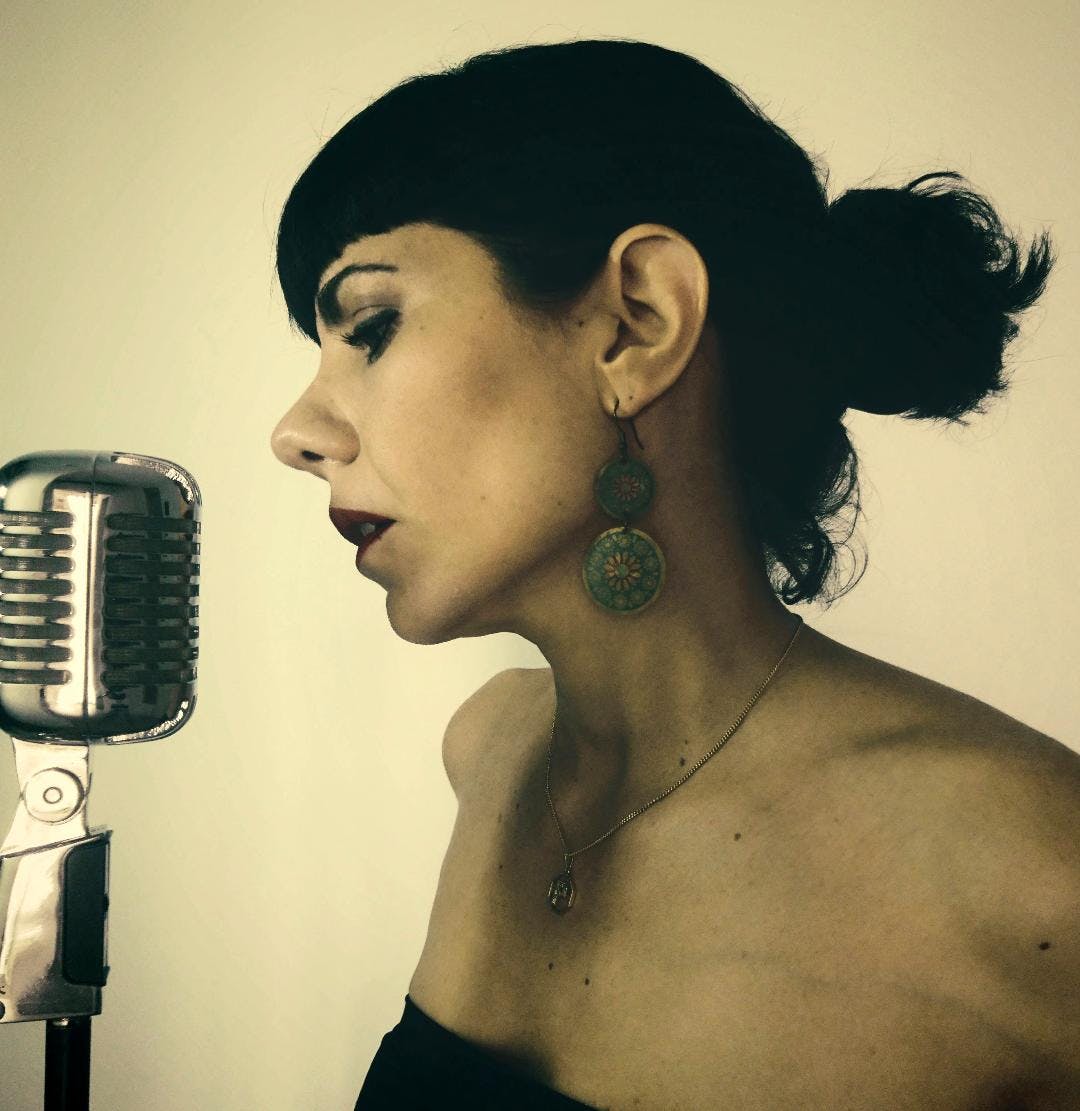 I met Paola a couple of years ago in Barcelona via my man and was immediately struck by her beauty, pose and charm. The more I got to know her, the more blown away I was by all of those things but also by her voice and musical talent, coupled with her fierce intelligence and integrity. Over the years, I have come to count her as a friend, she and her partner have generously opened their home and their hearts to me. We have had the pleasure of working together, she has sung on my album and on stage with me a couple of times. In addition, they recorded a fabulous version of my song Never Love a Cowboy on their last album ‘In Nowhere Land’.

The music she and The Blueroomess perform is a riveting mix of Folk, Blues, Country and Bluegrass with many other Roots influences. Paola’s rich contralto voice with its wide range is warm and intimate, seducing the listener into their Americana world of Honkytonks, broken dreams and big yellow moons…

How did you get into music?

I think I’ve always been into music. I started going to a music school when I was just five years old. Initially I wanted to be a cellist, but when I met the sax teacher I fell in love! (With the instrument, not the teacher hehe) then I studied sax for several years, I got into Jazz, and finally I studied singing. My parents used to listen many musical styles, they instilled in me the love of music, and there was always music on the stereo in my house: Classical, Rock, Jazz, Blues, Latin, Americana…

Can you tell us a bit about your First professional singing job?

I was 18 (the legal age to work here in Spain). I worked for a couple of years in a local Orchestra in Galicia (Spain) we played dance music at weddings, local parties, and several events. It was hard, because in summer we practically did not sleep, but it was a “Stage School” for me. I lost all my shyness and I gained a lot of stage confidence with this experience. Before this I only sang in school music combos, Jam Sessions, and small venues in exchange for beers 😉

Could you tell us how The Blueroomess came into being?

It all started when I met Juanma in 2013. We came from different musical projects and both were looking for new horizons. He showed me some of his musical compositions and song ideas … and I started to compose the vocal melody, the lyrics, etc. We connected musically and spiritually immediately.

One of my favourite songs on your last album is Big Yellow Moon, which I believe you wrote? Can you tell us a bit about your songwriting process?

Yes, I love that song too. In this case, I did everything together: melody of voice and lyrics. Sometimes it happens, it’s as if the song suddenly appears from some magical place in my subconscious (and always having a recorder nearby is very important!).  I recorded the first Idea of “Big Yellow Moon” with a Zoom and sent it to Juanma and he immediately pulled out the guitar and found the chords. Sometimes it’s more difficult to “catch” the song, maybe it begins with a lyric, or with a riff and it takes longer to weave the parts of the song and give them shape. I usually take a notebook with me where I write ideas for songs, sometimes I show Juanma a lyric and he comes up with an idea for the song. Sometimes he comes up with a guitar melody and I write a lyric. We finally work together on these ideas. Normally once Juanma and I have a new song, we work on it with the rest of the band, they contribute with many valuable ideas.

What do you think women bring to their music that may be different from a man’s perspective?

That’s a hard question. I think it’s still harder for women to get noticed in art, but it’s a social problem. We have been silenced by the patriarchal society that has reigned until today. I believe that both, men and women, can provide a wide range of perspectives in their way of creating, there are as many perspectives as there are people.

What we consider “feminine” in art, can be created by a man or by a woman. Let me explain myself: Personally I think that a high sensitivity in the expression of emotions and empathy are associated with the “feminine”, but it is not a matter of gender, it is educational, and related to character traits and our personal development… In our educational system, men are prohibited from expressing their sensitivity and women are forbidden from expressing their ambition or competitiveness. There are many men with a lot of feminine sensitivity, and women with great strength and courage. I understand the masculine and the feminine as different and non-exclusive dimensions. I also believe that the problem of machismo will be solved through education.

A woman can have high masculine and at the same time also feminine character traits, and vice versa. (I consider myself very masculine and very feminine at the same time.) Actually I think that what differentiates us is the different kind of education received, the social treatment, and the opportunities. In the past, many women writers used a male pseudonym … and no one noticed when reading their books whether they were men or women, only the quality of literature was judged. But they had to use a masculine name to be considered and get published.

You’re from Argentina and have settled in Spain but you perform a very American music. What does this glorious mix of cultures add to the music you perform?

I can dance while I sing! Hahaha! Joking aside, while it is true that we make American roots music, and we are very influenced by this kind of music, I think our cosmopolitan origins are evident in our songs. We do not stick to the rules of any style (this gives us more creative freedom too) I think it can be noticed in the rhythms we use, in some chord progressions, and even in some lyrics.

Are there any new music or musical projects you’re currently working on?

Yes, I have a lot of new songs in process, we’re thinking of a new album by 2020. I’m preparing also a music-educational project about the Women of the Blues (but it’s still in diapers) and were trying to close a tour with Blueroomess for next autumn. Lots of Work!

Who are your favourite historical Roots sisters and why?

It’s hard to choose, but I’ll try… Obviously I Love Jazz singers, one of my favourites is Sarah Vaughan. She had an impressive vocal technique, with a very large vocal range, and she used her voice as a wind instrument (as others singers like Ella or Dinah) But Sarah Vaughan had something magical in her voice for me, when I was 10 years old I heard her singing for the first time … and I think it was the first time I cried listening to a song.

I really love Odetta and her particular voice, I discovered a lot of spirituals and folk standards by her albums. Sometimes I open my shows with “Lowlands”. I Used to sing Elizabeth Cotten songs too she was an amazing folk songwriter and guitarist. She wrote “freight train”, and did you know that she was Pete Seeger’s nanny? I use to listen a lot Big Mama Thornton, I love very much her broken voice.

At last but not least, I have to mention Sister Rosetta Tharpe, she was the first to cross the line between sacred music and secular music. Rock and Roll was born because of her.