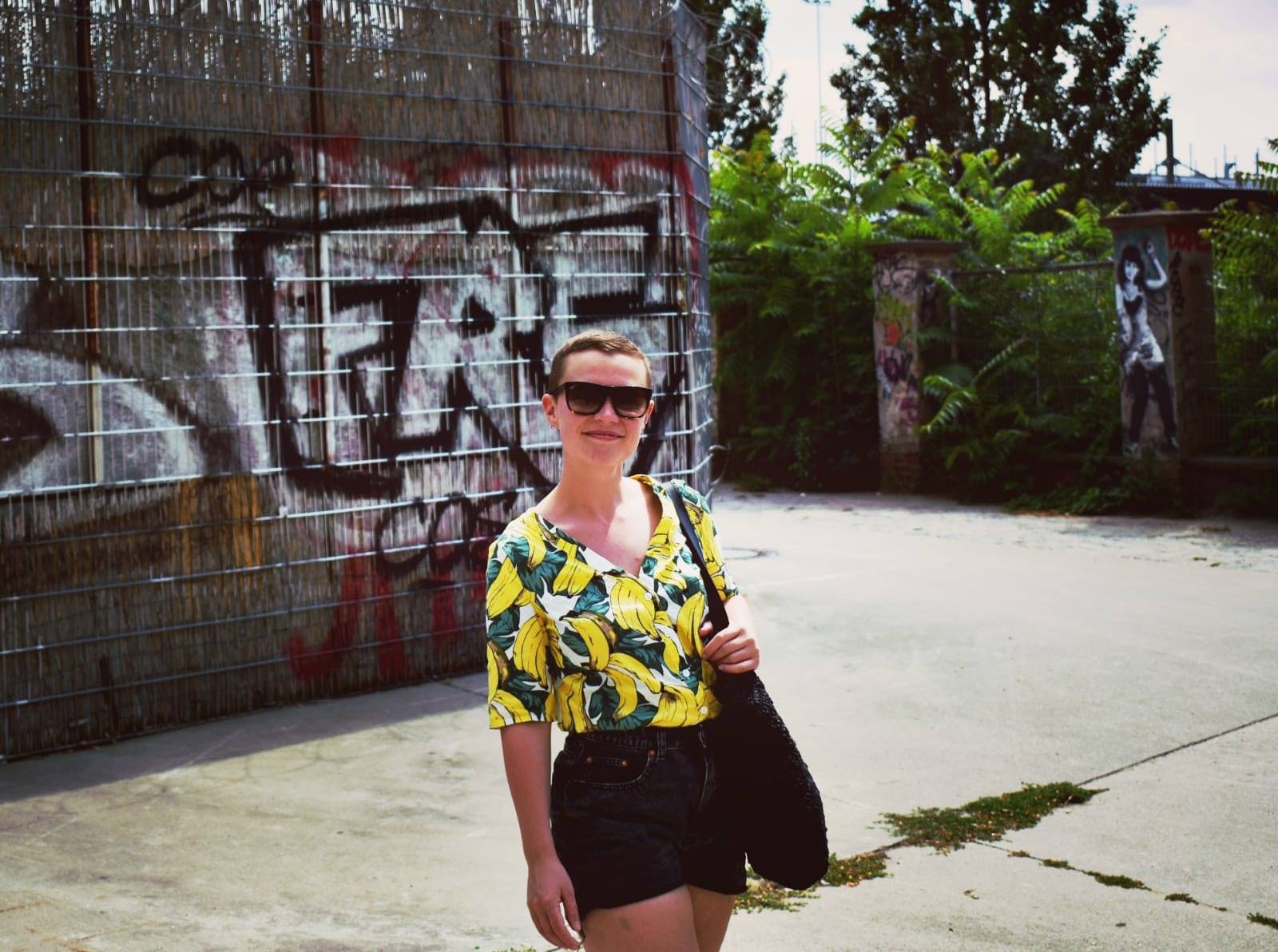 I remember the first time I tasted alcohol at twelve years old. The minute it touched my lips I wanted more. As I grew up, this kept happening. Everyone else was doing it and this was just what you did. I grew up in London, so around seventeen, started going to clubs. I started with your more commercial hots spots and then finally found electronic music and loved being on the dancefloor. I experimented further with other substances and had some of best nights of my life, I also had some of the worst. It’s a pretty generic Generation Y story. ‘Tales to tell your children one day’ I recall a friend saying at the time. Staying up for days, ending up in someone’s house at an after party, chatting about things you don’t remember in the morning, trying to hold on to the high. I travelled the world and attended some amazing festivals. I did and said things I can’t even remember now, living life hard and fast. My early Twenties were one big party.

At around twenty-seven the party stopped. A very close person in my life realized that they had a functional addiction to cocaine. Suddenly, the fun escaped and something dark crept in. Something I had only heard happens with ‘other’ people. Someone I loved was being ruled by a substance, causing them to turn into someone I wasn’t sure I knew. Had this always been the case and I’d not seen it? Was I too intoxicated myself all the time to realize?

At the same time, my body physically stopped enjoying my hedonistic ways and decided to tell me: Enough. My hangovers got worse, my anxiety and depression increased, my immune system was fragile and overall it just stopped working for me. It’s funny how health and our body functioning correctly is something we all take for granted until it comes into question.

A combination of these physical and emotional events caused me to take a step back for the first time in my life and reevaluate my relationship with anything inebriating. It caused me to ask the big question that no one really wants to ask themselves: is this working?

I realized this habit was costing me far too much. In my finances, in my relationships, my sense of identity, in my personal growth and development. I would burn through money that I didn’t have just to get out of it, I would also pay way too much for taxi’s or replacing missing items that were lost on battle grounds of a night out. I realized I wasn’t really connecting, I wasn’t really being intimate with those around me. I was having the conversations on nights out but had no idea the next day what was said to one another. I realized that certain relationships in my life were completely superficial and purely based on getting hammered. I was really seeing with my eyes open, who and what was around me. I realized I had been under the influence for so long and throughout my childhood that I didn’t know how to do or be something else? I realized I was spending so much time and energy on this instant gratification, what if I put all that energy into something initially harder but I found much more rewarding, much more fulfilling and I had more to gain from long term. I realised that I was using it to take the edge off everything, to release my own internal pressure bottle and even though for that evening, it worked to purge the tension, I suffered the next day and the tension within always came back 10 times stronger.

What is addiction? Where are the lines between someone who is an addict and who is not. I unknowingly had my own stereotype or image of what an ‘addict’ was. Sometimes you don’t always realize it has its hold on you until it’s too late. We also often surround ourselves with people who are similar to us, to reassure ourselves that we have it all under control. That it’s normal to live our lives without parameters or boundaries and to excess.

I sat back and realized that I wouldn’t be able to change anything in my life until I took away the substances because they were acting as an enabler. It was facilitating me to function and cope with the way things were. But was I happy? And did I really know who I was, what I needed or wanted? Why was I putting myself through this, working at 50% most of the time, through a fog, just to feel alive on a Friday and Saturday night.

Was I really living?

What began was a deep cleanse. A change. An investigation. In my thinking, habits and my relationships. It unearthed all my demons. I suddenly had to deal with people viewing me as an outsider or strange or a bit boring. Asking if I was pregnant or on antibiotics (because I surely couldn’t be choosing this way of life?). People trying to coerce me to drink even though they knew I wanted too and I was struggling to decline. Others assuming, I was judging them based on my own person choices. I had to deal with worrying
if I still had an identity, would people still like me if I didn’t have my loud, lairy party girl amour on – wondering if I was no longer interesting. Having to actually deal with life. Like when I felt scared, or sad…learning to sit and acknowledge those emotions rather than blocking them out and self-medicating. Learning to sleep and to enjoy sleep because it makes me feel better. learning to listen to my body when it needs something and not push it harder. Learning to let go of a certain story and welcome in another, seeing light and fulfillment in other things in life. I learnt to have real conversations with the people I love. Tell them I love them, really mean it and remember it. I learnt how to be myself, warts and all, unapologetically, and not feel guilt or shame the next day about what I had said or done.

Officially I have been sober for one and a half years (minus a couple of slip ups here and there). I reflect back now and realize that it’s a cycle many of us are in without realizing. It takes a while to relearn habits and welcome knew ways of working. I think of the amount of friends growing up that didn’t really want to be involved, that I egged on and facilitated and it actually wasn’t for their own good or what they wanted, but they didn’t want to be socially excluded. I feel bad about that now being on the other side but I also can view it with the experience of both mindsets and judge neither. Everyone is free to make their own choices and we all make the choices we do based on the capacity and knowledge we have at the time. Throughout this process, I swore I’d never ever judge anyone for their journey and be totally open to what people choose to do with their lifestyles.

I also swore that even thought I was choosing to be sober, my life wouldn’t end. I wasn’t ready to hang up my dancing shoes and get my Zimmerframe out yet. I did, however, realize that my relationship with raving had to change. I often shy away from the conversation when people ask, feared to be viewed as a party pooper or judgmental. It’s often a conversation we avoid having with ourselves let alone others. Some people can get away with it for a long time but I think for most of us, at some point, that kind of party has to end. Or maybe it’s easier for some to put in the boundaries than others. Maybe our lives just naturally get fuller with other things in many ways. I know for me, even now, I am a colossal binge drinker. Just like the first time I tasted it, the minute It touches my lips, it’s like an old friend that I’ve lost contact with, over excited to see again. Nonetheless, it’s easier to avoid and eliminate from my life now, like anything you practice enough, it eventually gets easier and you get better at it. I recently DJ’d on a trip to Berlin. This was a city I had visited since I was twenty-one and let’s just say, had many a good time there. This time, I stayed up all night, danced my arse off and met some brilliant people. I declined inciting offers and felt really good about it and when six am rolled around I was ready for some breakfast, a shower and my bed (without any guilt or shame).

If we spend our lives focusing on what is lost, we are forever going to feel as though we are missing out. You keep yourself in a prison, depriving yourself of true happiness and feeling content. It’s some sort of sadistic internalised FOAMO (fear of missing out) we all put ourselves through.

The lesson of it all for me: Sometimes you have to lose a little, to gain a lot. You gain the things that aren’t always so obvious, not so instant, but so very, very important.

Lauryn Harper is a DJ, producer, activist and resident at SISU. She is part of the core team at SISU and supports with workshop facilitation and bookings. Follow her on twitter: @Harperworkz, facebook: @harperwokz and Insta: @harperworkz.