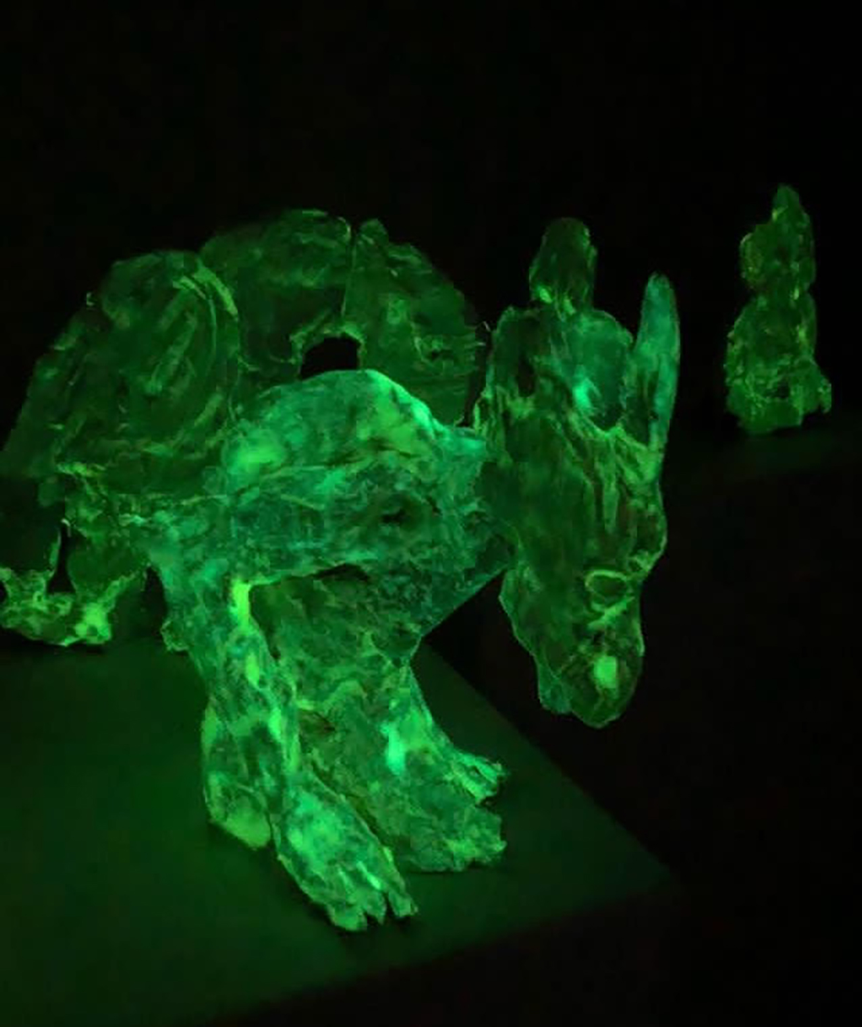 The Riddle of the Imp on the Mezzanine – Steven Warwick’s New Radio Play.

At the last Threads*ZK/U all-day-pop-up we were very excited to host a live reading of Steven Warwick’s recent performance work The Riddle of the Imp on the Mezzanine. Part of his continuously mutating Mezzanine series, The Riddle… was previously performed at London’s ICA and Reading International.

You can listen to it here for a limited time.

Steven Warwick is an artist best known in the music scene for his Casio driven keyboard raves as the now defunct Heatsick as well as other PAN releases under his own name. He’s also a DJ, film- and theatre-maker, as well as a writer or as he says himself “I just do everything”.

Lately his work has taken an uncanny turn, beginning with his 2017 collaboration with Nora Khan Fear Indexing The X-Files which produced both a book and a performance and followed by his exhibition at Berlin’s Aesthetik01 The Grotesquethat featured banners reading “redemption” and “salvation” and glow-in-the-dark gargoyles.

This latest work: The Riddle of the Imp on the Mezzanine gives voice to The Lincoln Imp, a stone figure on a wall inside the Lincoln Cathedral in the town where Warwick grew up. Legend has it that The Imp was sent by Satan to cause mischief until it was turned into stone by an angel that flew out of a book of hymns. As The Imp awakens with no memory of its former life, its interlocutor (played by fellow contemporary artist Marie Angeletti) is the detective Poirot who shifts between bullying and psychoanalysing the defiant Imp as it slowly regains its memory.

The story mixes folklore, horror and humour with a similarly lyrical methodology established by The Fall’s Mark E. Smith, but it produces markedly different results. Smith’s lyrics blended comic book characters and observations of the everyday with turn of the (20th) century ghost stories (see Mark Fisher’s incisive blog posts on the topic Memorex for the Kraken) while Warwick’s work employs characters like Hellraiser’s Pin Head, fictional detective Poirot and The  Hunchback of Notre Dame via Disney via Victor Hugo via Disney.

And it’s not just the cast that has been updated. The weird fiction lyrics of The Fall were an early form of popular inter-textual writing but like most punk adjacent art they were employed largely as a strategy for lampooning hypocrisy. The 70s and 80s was a period obsessed with cultural authenticity: one’s accent, background and subculture were considered immutable and in opposition to other forms of cultural expression. Goths never did listen to hip-hop. And this obsession was related to the inescapability of class. Calling out hypocrisy was a method for forcing class struggle on those who might pass themselves off as elites. However, since the casualization of labour, workers no longer hold a job for their lifetimes and the production of a single life-long identity no longer makes sense.

Warwick’s parents were from London and his childhood accent was Cockney but through the disincentives of the education system and the influences of travel his accent became dislocated and softened. It returns, however, in the exaggerated cockney accent of Warwick’s Imp, reminiscent of Tolkein/Peter Jackson’s orcs whose uncouth manners were intended to invoke horror. This fits Fisher’s diagnoses of the portrayals of the working class in weird fiction as being brutish and irrational monsters from the id at the same time that they were the repositories for ancient and arcane knowledge.

As Fischer quotes ‘the grotesque tends to operate as a critique of a dominant ideology which has already set the terms of, designating what is high and low’ Within Warwick’s text The Lincoln Imp is as outside of history as it is society. Its place high on the wall is literally above those it observes, passing judgement on the people below regardless of social status.

With the end of notions of authenticity comes the end of irony because, if one’s identity is unclear, the performance of the opposite of that identity becomes impossible. If punk era notions of authenticity no longer fit with contemporary folk expressions like The Riddle of the Imp… they leave artists more able to earnestly explore the esoteric and the absurd. Current notions of shifting identity are completely alien to the religious morality of The Imp’s original makers, yet these themes persist in the contemporary and folkloric fiction of which Warwick’s new work is a critical continuation.

Nathan Gray is an artist who works with spoken word and the voice his works take form as lecture-performances, radio-plays, narrative and rumour. He is the host of the Weirding Module on Threads*ZK/U Berlin an ongoing enquiry into the spoken word in contemporary art and experimental music.

He is one of the programmers of Threads*ZK/U Berlin and started the series Recorded Resources where artists make mixes on a chosen topic of importance to their practice.

He writes fiction and art criticism for various publications including this one.