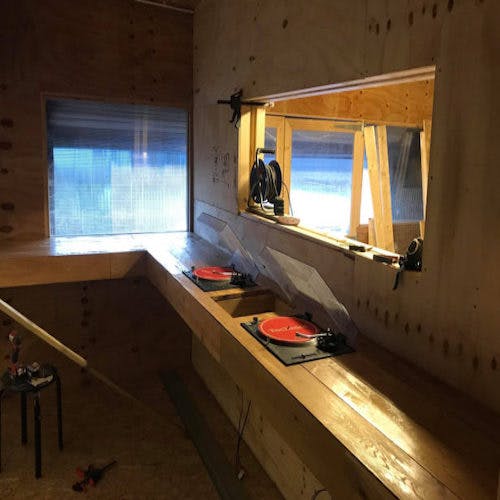 What and who is Threads radio? Well, according to Lee Kirk-Fagan the station’s co-conspirator, it’s very much the, ‘collective will of the people involved.’ I joined the previous incarnation of Threads (199Radio) in March of 2018 after casually messaging the station’s facebook page. I think, for a lot of people in those early days (the station had been around for a year before I joined) the station must have seemed – and rightly so – like an open playing field where anything could happen. As a producer, I had such a broad range of shows on my regular slot to look after that it never really felt quite the same as other stations I’d listened to. But, to answer the question as simply as possibly: Threads is a station that’s open to anyone.

At the previous incarnation (199Radio), the love for the station that the hosts and producers all shared was undeniable and visible for all to see. Bar a few teething problems that were to be expected in every nascent endeavour, the station was performing its role spectacularly: it was a platform where anyone, literally anyone, could have a voice and a show. There were no entry requirements, you didn’t need to have prior knowledge of the equipment or broadcasting and whatever you wanted to do was pretty much just accepted. If there was a space, you had a show. If there wasn’t space you’d just have to wait.

The old studio after a Saturday night.

To a large degree (fortunately), that mentality has carried over to Threads. While there’s been such incredible hype about the launch – and rightly so imho – our roster of show hosts mostly mirrors those who helped bring the station to this point; many of whom had their first radio show on the station. There will still be students, nurses, IT technicians, teachers, and, of course, professional DJs playing music and hosting. Alongside acts like Juan Atkins (this Friday after the Launch on Thursday) undoubtedly – due to our new positioning above the Cause – we’ll be hosting more legendary global talent like him. The station looks set to maintain its DIY to occasional legend to everything in between ethos.

When speaking to Freddy (the founder) and Lee (the other head honcho) you get a sense of how much they not only love the medium but have their own long involvements to draw from. As a producer, the enthusiasm and knowledge they both have is certainly inspiring. When I caught Lee in between various fits of exhaustion and elation during the run up to Launch day he had this to say, “My background is in pirate radio, I was involved in the late 90s and I followed pirate radio from the age of about ten. And, when I left school I was DJing and producing music with people on pirate radio stations.” Evidently then, there’s a depth of knowledge and love that reaches back much further than, I imagine, most of the rest of us at the station. Having said that, previous hosts like Billy Nasty and Jerome Hill have at least this level of experience and likely more. While the slightly more recent adherents may be able to match the love, it’s always good to know that the people who have the reigns have a good understanding of where the music has come from and that they value the non-commercial, DIY element that has always underpinned (in this humble writer’s opinion) the best of dance music scenes.

But then, the station isn’t all about the music is it? In Freddie’s words, it’s as much about, ‘the mystery.’ When pushed to elaborate on this (plot twist: he didn’t need pushing) he clarified that, for him, ‘I got into the mystery of radio even before I got into the music. In some social way, it’s got some kind of discursive role and it’s about storytelling: it would always convert itself in a mysterious way. When contrasted with other mediums, it may seem obvious but you can’t use your eyes you just use your hearing, I’m obviously talking about radio as a concept more than just music I don’t want to corrupt that.” It’s this love and experience that we’re lucky to have underpinning Threads and long may it continue that way.

So, a clear purpose, a clear vision and clear passion: that’s what Threads and Threads* (the global stream) is going to be about. So, listen up.

Luke Thurnham is a content curator and contributor at the Threads radio blog. He also fits in teaching, DJing, producing (at the station), volunteering, and political activism into his schedule. Outside of this, he spends his time (yeah, what time) being mildly depressed and playing video games. Follow him on twitter @GSVwhatgravity